In 2012, Microsoft announced the launch of its MSN spinoff website msnNOW with much fanfare. At the time, the site was promoted as a place where people could check out some of the most talked about stories of the day from social media outlets. This week, Microsoft announced that it will be closing the msnNOW site on December 3rd. 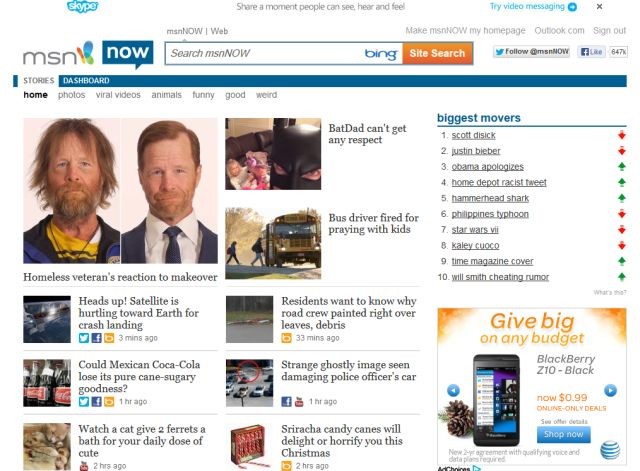 In a post on the MSN blog, Microsoft stated that the shutdown of msnNOW was due to its "ongoing work to fine-tune our editorial mix." It added, "Rather than having a single home for trending content, we will continue integrating that material throughout all MSN channels." MSN will also be adding a special section of its site devoted to offbeat news in the near future, according to the blog.

In September, online reports claimed that Microsoft had cut over 100 contractors and freelancers who worked on the MSN site. It's unknown if the shutdown of the msnNOW site is related to those cuts.  Thanks to the recent "One Microsoft" reorganization changes, the team that runs MSN.com is now a part of the Bing Apps group that develop many of the in-house Windows 8.1 and Windows Phone apps.