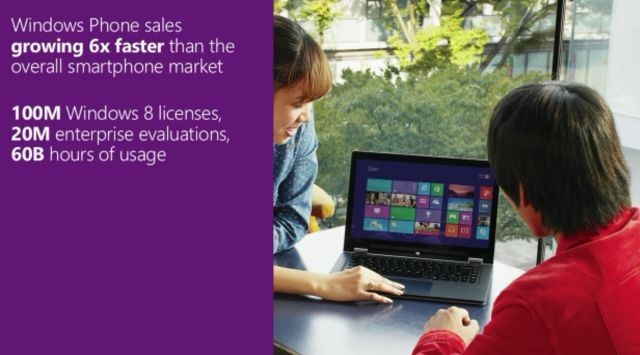 In May, Microsoft announced that it had sold 100 million Windows 8 licenses since it launched in October 2012, which it said was on a par with sales of Windows 7 during the same time period. Today, as part of the 2013 Microsoft Worldwide Partner Conference, Windows marketing head Tami Weller repeated that statistic but also offered two other bullet points on Windows 8.

As part of her keynote speech at WPC 2013, Reller said that so far, Windows 8 has seen 60 billion hours of use since launch. While Reller didn't offer any comparisons to earlier versions of Windows, 60 billion hours of anything certainly sounds like a lot.

Reller also said that so far, there have been 20 million evaluations of Windows 8 in the enterprise market. Again, she did not offer any information on how those compare to Windows 7 in the same launch time period, but it seems that more and more businesses are moving toward Windows 8, especially given that, in less than a year, Microsoft will end official support for Windows XP.

Finally, Reller said that new customer activations of Windows 8 have continued "at a consistent pace". Earlier this month, data from Net Applications showed that the PC market share for Windows 8 has now surpassed that of Windows Vista.