Microsoft's already made one interesting marketing tactic this week, and it appears the company's not done yet.

Today Microsoft has released a new video on YouTube touting the comeback of its Internet Explorer browser by focusing on how people love to hate it. In the video, seen above, an individual is depicted trolling news stories, videos and Twitter accounts about how much Microsoft's browser "sucks," even when positive news stories about it are released.

The video ends by the troll typing "IE sucks... less," after which Microsoft proclaims "progress" is being made and that "comebacks come in many shapes and sizes." Following that, the video mentions Microsoft's website to promote the campaign, TheBrowserYouLovedToHate.com. On that website, which is powered by tumblr, people can read positive statements about the browser from tech websites. Interestingly, two of the menu links are titled, "It's good now" and "No, really," indicating Microsoft is well aware of the backlash to its browser. 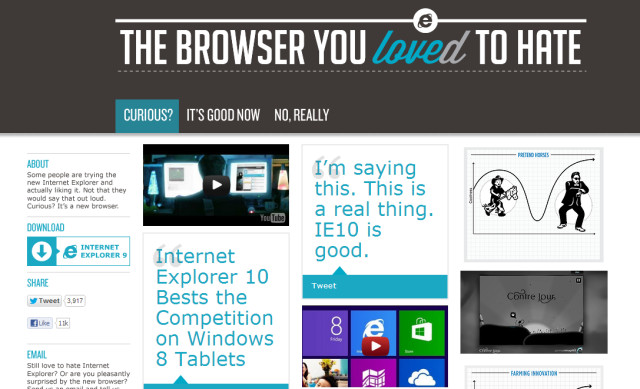 Based on the website's archive, Microsoft added seven new posts today as part of the marketing campaign. This could indicate the company plans on ramping up its efforts to promote Internet Explorer, although it already has several commercials that currently air on television in the United States and other substantial markets.