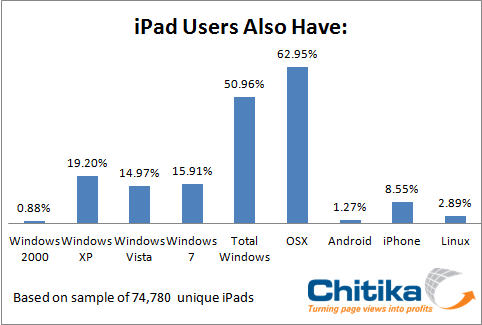 An iPad tracker from Chitika Labs is currently tracking the various statistics of other non-Apple products new iPad adopters own. Dan Ruby of Chitika Labs forwarded the above bar chart to CNNMoney.com's Philip Elmer-DeWitt yesterday afternoon.

The results are interesting. More than half of the polled iPad adopters run Windows, with a fairly equal distribution of users across Windows XP, Vista, and 7. However, one may assume a substantial portion of iPad/Windows users are dual booting Windows with OS X on their Macs, as OS X users account for about 63% of iPad users. A surprisingly low number of users also own a smartphone device - less than 9% own an iPhone and 1.27% run an Android-based device.

The iPad tracker currently reports an estimated 967,000 iPads sold in the United States, with the highest number (just under 20%) in Apple's home state of California.