Pages on the NBC.com website suffered from a major defacement today as a result of a cyber attack just ahead of Guy Fawkes Day, which will occur on Monday. 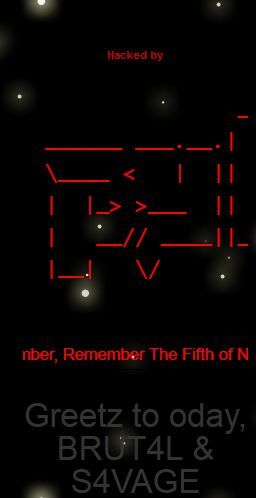 The hacked sites, including this page on the Grimm episode guide, have messages that reference the famous event where Guy Fawkes attempted to blow up London's Parliament building in 1605. The Guy Fawkes mask has been used as a symbol by the hacking group Anonymous. However, it appears that this latest event was handled by a person calling himself "pyknic" and that Anonymous had nothing to do with it.

The messages, which also include an embedded piece of music, also claim that passwords and other user info have been exposed as part of the cyber attack. NBC.com has yet to comment on the hacking of its websites. Deadline.com reports that the cyber attack started with NBC's Saturday Night Live web portal, along with the sites for the Jay Leno and Jimmy Fallon talk shows. The attack then spread to other websites.

While Deadline.com reports that the site is back to normal, we have found other sites on the NBC.com portal that are still defaced by this latest cyber attack.

Thanks to Nate for the tip!