Netflix is extremely popular in the territories it supports. There are many positive reports about how it has improved someone's experience with television in the modern age, but there has always been one chink in the service's armor. That weakness is subtitling, or 'closed captioning' as it is also known. Some things don't come with subtitles, and subtitling can be useful in some situations - for example, identifying unusual words or seeing a sentence's construction. Netflix is beginning to acknowledge this for itself, by starting to crowd-source subtitles.

The service has launched a crowd-sourcing system via Amara, also known as Universal Subtitles, in an effort to improve subtitling of its shows. They want a small group of people from the community to sign up and provide subtitling. The emphasis is on keeping a small group to experiment with, for the idea might never come to fruition. Initially, Netflix wants to focus on older programming. An official statement on the decision follows:

“Netflix is committed to accessibility and we have decided to test Amara to see if it could work for Netflix content. This is a small scale, early stage test. It is premature to discuss if we would actually use the titles resulting from this test or any future use of Amara.” 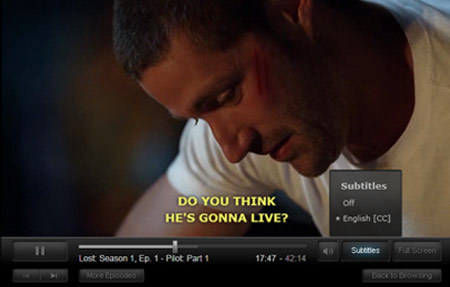 Some episodes, such as this still from the Lost pilot episode, do provide subtitling normally.

Netflix has committed itself to testing things regularly. The service rarely goes without putting something to the test, seeing if it'll work for them. In the United States they currently offer close to 50,000 movies and television shows, so the service is able to provide for a lot of different tastes. It's also available in the UK, and is likely feeling the benefit of being available on Microsoft's Xbox 360 console.

Amara is quite popular for what it offers. The service allows crowd-sourcing of captions, but it can also be used for other purposes as necessary. Media outlets including PBS and Al Jazeera have both used Amara in the past to provide subtitling on videos. Crowd-sourcing is only one thing that the service offers, but it can do more. If Netflix's test pays off and Amara becomes the provider for crowd-sourced subtitles then it could help provide more closed captioning in the future. As a fan of subtitles in some situations, I couldn't see this being a bad thing. Subtitles definitely have their benefits and assuming the Netflix community doesn't abuse them the service could become a model for others to be compared to.