Boy Genius Report has discovered several new features in the latest update to the iPhone OS 4.0. The new additions to the software include File Sharing through iTunes, iPod Widgets, Orientation Lock and the closing of multiple applications has been streamlined. 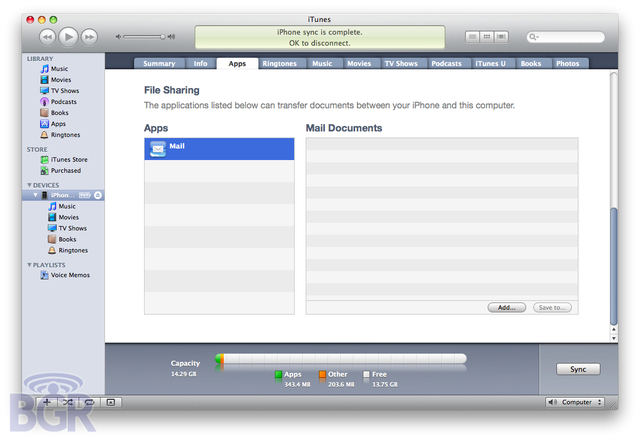 The file sharing feature is located at the bottom of the Apps tab once the iPhone has been plugged in. Applications with file sharing capabilities are then listed and documents can be transferred between the iPhone and the computer. The feature does not appear to be working at this stage and support for other Apps should be expected if file sharing is included in the final release of the iPhone 4.0 operating system.

A welcome new addition to the iPhone in the new beta is being able to lock its orientation of the UI. Once more in the multitasking interface by swiping left and clicking the Portrait Lock icon the orientation will stay in place.

Also another slightly annoying problem in the previous betas was the option to only close one application at a time. This has been solved by press and holding an icon of an application that is to be deleted and the option is given to delete multiple applications at one time by simply pressing them too. This method is comparable to the way applications are deleted on the iPhone.

About two weeks ago it was also discovered the new OS had social networking integration, although only Facebook appeared to be featured.

Engadget reports that the iPhone OS 4 beta 3 release was slightly bungled as it was pulled shortly after its release. However it is now available and no features appear to have been removed.