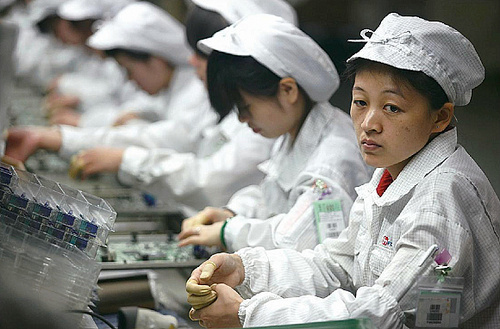 Foxconn, the world’s largest manufacturer of electrical components, is facing a leaked report that states the company abuses its employees. The report also says that the company has been responsible for harsh punishment, illegal labor practices and unsafe working conditions for its workers.

In May,it was reported that 11 workers had committed suicide and that the last employee had only been working for Foxconn for 42 days. The tense situation ended with Foxconn announcing a 30% pay-raise for its workers. The new report states that the rise was no higher than 9.1% and that workers were missing out on bonuses which they were promised.

A survey, conducted by more than 60 teachers and students from 20 different universities in Hong Kong and Taiwan found that at the company’s Shenzhen, Kunshan, Taiyuan, Wuhan and Shanghai plants, workers were being abused and were the victims of other human rights violations. In some plants, the abused workers made more than 50% of the plants employees. Fourteen of the students trying to conduct the survey, went inside the plants themselves to get a full experience of what life really is like.

Global Times has reported that 38.1% of all Foxconn workers had been subject to privacy invasion by management and that 16.4% had been physically abused.