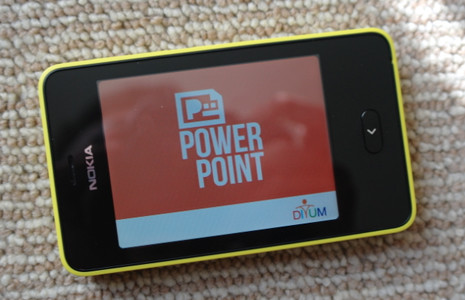 A few weeks ago, Microsoft announced it would be buying Nokia's devices and services business. That meant not just acquiring its Lumia smartphones but also its Asha feature phone business, which sell tens of millions of units in Asian and certain European markets.

It stands to reason that when Microsoft is fully in charge of the Asha lineup, it may put in versions of its own software in those cheap mobile phones. Today, Nokia announced that the Asha 501 phone owners can download a beta version of My Pocket Office, which contains readers for Word, Excel and PowerPoint files.

The color scheme for each of the My Pocket Office applications is different; there's blue for Word, green for Excel and red for PowerPoint, shown above. None of these apps can actually create or edit the files that they are associated with but Asha 501 users can now read a Word document in full if they get an email attachment, as they can with any PowerPoint or Excel documents.

Nokia's blog post points out that since this is a beta release, there will likely be some bugs, and the blog also mentions some formatting issues with the Word reader that will likely be addressed in an update. However, this is just a first release and could be a preview of even more Microsoft software that could find their way to other Asha devices in the future.