Earlier this week, Microsoft unveiled the first handset to wear its own logo, the Lumia 535, as the company continues to phase out its use of the Nokia brand from its Windows Phone range. But as Nokia's logo disappears from Microsoft's handsets, it may not be long before it returns on other devices.

After Microsoft completed its acquisition of Nokia's devices and services business earlier this year, it licensed the use of the Nokia brand for around eighteen months for the Lumia range, and for ten years for its low-cost feature phone range. But the terms of the agreement do not prevent Nokia from licensing its brand to other manufacturers - and it seems that the Finnish company may well exercise its right to do that in the not-too-distant future.

As NokiaPowerUser reports, the company's CEO, Rajeev Suri, spoke recently at its Capital Markets Day 2014 event, at which he said that the Nokia brand will "return to the consumer world". Currently, what remains of Nokia is focused largely on business and mobile industry services, such as network infrastructure, R&D and its HERE mapping platform.

Among the slides shown at the event was one which noted that Nokia is ranked in the top 100 'best global brands' by Interbrand. Significantly, the slide also revealed that not only will Nokia be able to license its brand to other companies for use on their handsets from Q4 2016, but in fact, Nokia can already license the brand for use on "other devices" right now. That means that we could potentially see a new tablet, for example - or perhaps something like a set-top box or Android TV device - being built and launched by another manufacturer, but sold with the Nokia logo.

It's essential to note that Nokia isn't planning to design and build these devices itself, although it may maintain some involvement with the design of devices that are sold under its brand name.

Nonetheless, what we're looking at here is not Nokia's 'return' to the smartphone business - since the company will have relatively little involvement with actually developing, launching and selling the devices - but simply a case of Nokia allowing another company to do all of the hard work and market their products using its brand. 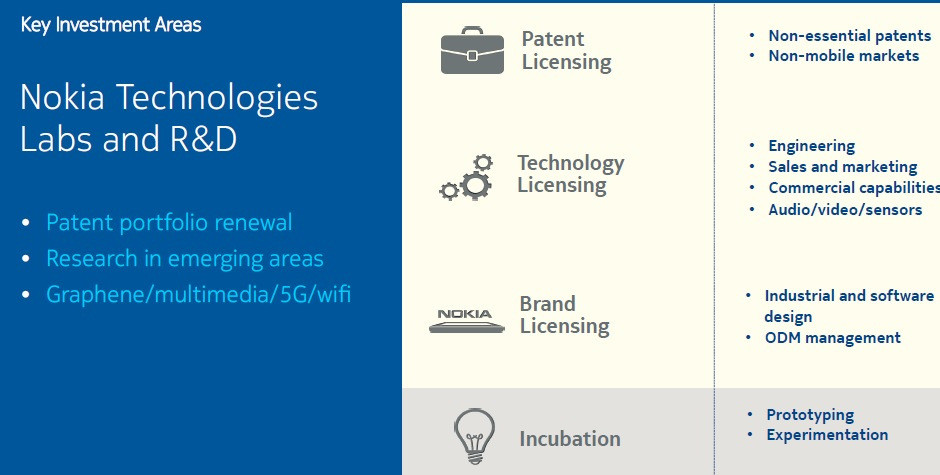 "Brand licensing" is listed as a "key investment area" for the company's Technologies Labs and Research and Development divisions, in a second slide shown at the event. It specifically highlights "industrial and software design" and "ODM management" as areas of attention for Nokia. ODMs - or original design manufacturers - are companies that create devices for other brands; Foxconn is perhaps the most famous example, building devices like the iPhone for Apple.

It seems likely, then, that the Nokia logo won't be absent from devices for too long, with the company's ability to license its brand for certain devices right now. But it will be another two years or so before the Nokia brand can be seen on smartphones again, as its agreement with Microsoft prevents its use on such devices until the end of 2016 - and even then, any new 'Nokia' handsets will be the product of another company, and therefore Nokia devices in name only.

For the next 24 months or so, the only new handsets to be released with the Nokia logo will be ultra-affordable feature phones like the 130.