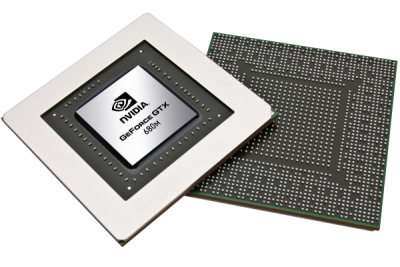 NVIDIA has announced that its current GPU architecture found in its top-of-the-line desktop chips, Kepler, will be making its way to notebook GPUs.

In a press release, the company announced the NVIDIA GeForce GTX 680M, the first mobile GPU to feature its Kepler architecture. NVIDIA claims the GTX 680M is the fast mobile GPU ever, according to its own real-world and synthetic tests. Although it didn't provide in-depth information regarding its tests in the press release, the company provide a few statistics comparing the card against AMD's top mobile offering, the Radeon 7970M.

The GTX 680M will feature 2GB of GDDR5 RAM, a 256-bit memory bus width, a memory clock of up to 1800MHz and can be implemented in either a single graphics card configuration or in a dual-card configuration through SLI. The first products to feature the new card will be Alienware's M17x and M18x laptops, which will have an option for the new card "in the next couple of weeks." The GTX 680M will also be available in MSI's GT70 notebook.

Additional information about the NVIDIA GeForce GTX 680M's specifications can be found here.