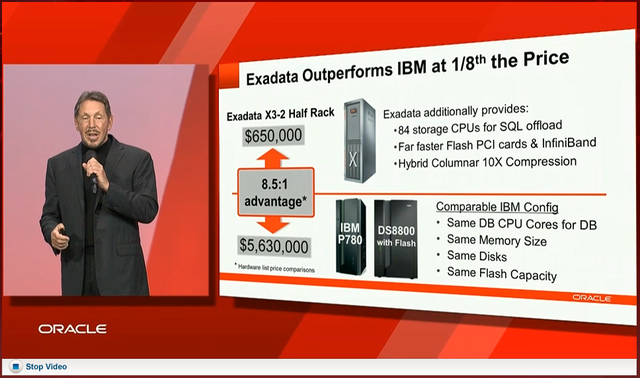 Larry Ellison, Oracle's CEO, kicked off the conference Sunday night with his annual keynote. The company announced the release of the new Exadata X3, up to 20 times faster than the previous database appliance, and at the same price point. They brought a newer, smaller Exadata (1/8th of a rack) to market, although there were few details and it probably means it will not have RAC for redundancy. They also announced a new version of their database program, 12c, which cloud based and allows for multitenancy. Although the keynote was relatively tame (and felt more like a sales pitch than a vision of the company's future), Larry still took a few shots at his competitors as well as his partners.

While the keynote didn't bring along any attacks like last's year's attack against Salesforce, Ellison still had a few barbs ready to go. While comparing the new Exadata product to IBM's HANA offering, he quipped that Oracle's appliance has 26TB of memory, while IBM's has only 0.5TB and is "a small machine." He also dismissed Salesforce again, saying that Oracle's cloud competitor is actually Amazon's elastic cloud, and not Salesforce. Mark Hurd later said, "Remember, Salesforce only does one process - sales automation. Glad they use Oracle database and middleware, but still..."

The real fireworks from the keynote were when Ellison began comparing the Exadata storage speed to that of EMC. He noted that the EMC VMAX is much faster than any of their competitors, but compared to a full rack of Exadata, it's roughly half as fast and when compared to a fully loaded eight racks, is almost 16x slower. He ended that section of the keynote by declaring storage arrays may no longer be needed. Normally you'd shrug this off, but EMC is a strong partner with Oracle, and are one of the main sponsors of OpenWorld. We can imagine that Joseph Tucchi, CEO of EMC, was probably not smiling during this exchange.

But that's who Larry Ellison is, and nobody can deny that he's a clever businessman. While many people call him "Crazy Uncle Larry," it's clear that he's crazy like a fox.