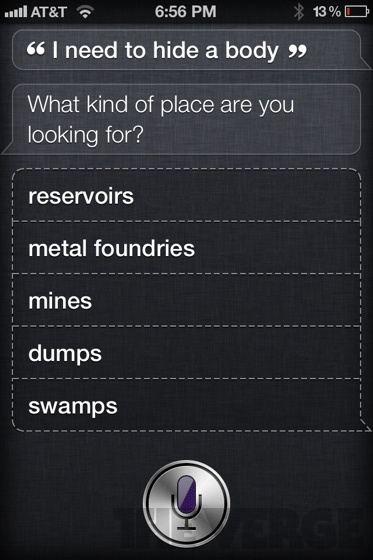 Siri has been making waves in the tech community. Gadget bloggers have been blown over by the surprising accuracy of the service, which lets users tell their phone what they want it to do. Apple-approved examples include replying to a text, putting a meeting on a calendar, and finding a nearby restaurant. But fans have managed to uncover some less common answers to questions in an effort to try and trip up the program.

Thisismynext, when asking the phone where they can buy some drugs, were told the distance to two nearby rehab clinics. Despite Siri's artificial wit, the program is not the best at telling jokes. "I can't," Siri said, "I always forget the punch line." Siri also gives a hand to people looking to hide a body, suggesting among others a metal foundry and a swamp.

Apple has a long-standing history of putting hidden easter eggs into its products. When connected to a network with a PC on it, Mac OS X will show the connected computer as a beige monitor with a blue screen of death on it. Also, Apple Speakable Items has a list of built-in jokes that it will read from when prompted for a joke. When asked too many times, the program will tell the user to get back to work.

The full gallery of responses can be read here.