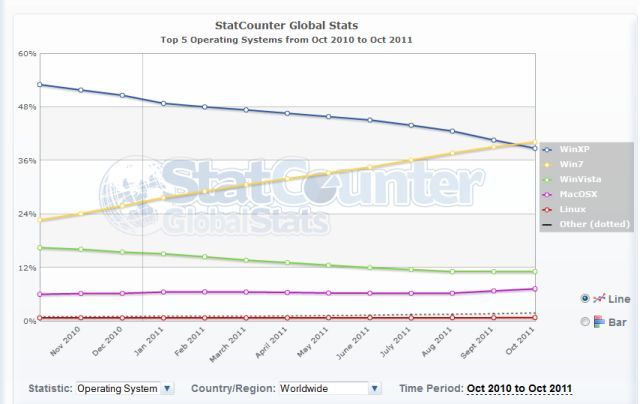 Microsoft's latest entry in its Windows operating system is finally being used more than Windows XP. That's the word on the StatCounter web site this week. Its newly updated graph on the top five operating systems shows that Windows 7 is now in 40.15 percent of PCs in the world, compared to 38.77 percent for its 10 year old Windows XP OS. Windows Vista, which was released after Windows XP but before Windows 7, is shown to be installed in 11.16 percent of all PCs in the world, followed by Mac OS X with 7.26 percent and iOS in fifth with 1.11 percent.

StatCounter gets its numbers via a tracking code that is placed in over 3 million web sites worldwide. The site says, "Every month, we record billions of hits to these sites. For each hit, we analyze the browser/operating system used and we establish if the hit is from a mobile device."

This shows that Windows 7 is being used more and more by PCs users while Windows XP, which has been the mainstay of the PC operating system world for most of the past decade, is starting to be abandoned or upgraded to the latest version of Microsoft's operating system. It also shows the failure of Windows Vista, which suffered from bugs and a lack of working third party drivers when it launched to the public in January 2007. Windows 7 launched in October 2009.

Just this week, Microsoft urged businesses once again to upgrade their Windows XP-based PCs to Windows 7 as soon as possible and not to wait until Microsoft releases its next OS, Windows 8.