Vortex has been quite a popular brand for mechanical keyboards and enjoyed a lot of success with their original Poker and Poker 2. What makes the keyboards really stand out is the fact that they're 60% keyboards, which are keyboards that don't have a numpad, arrow or home cluster, and don't have the function row either. These buttons are instead accessed through FN and PN modifier keys. There is a learning curve to this, though, but we'll cover all of that in the review below! 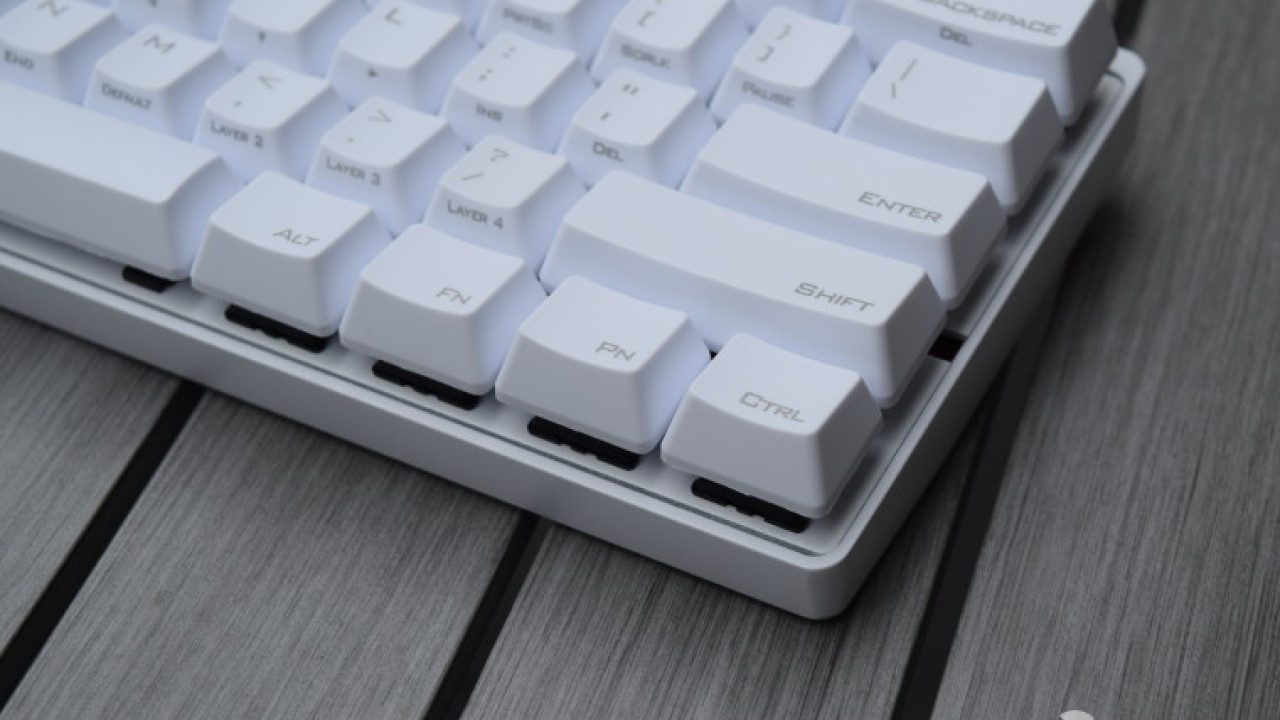 The POK3R shares a similar design to the original Poker and Poker 2 in that it has the 60% layout rather than a tenkeyless or full sized layout. You're given the option of a white or black keyboard, in which both the keycaps and aluminum case will be either white or black (although for the black option, the keys are actually closer to a dark grey).

Speaking of the aluminum case, this was a great move by Vortex. For those who are familiar with the keyboard modding scene, you know that aluminum cases cost over $50 for a second-hand one and cost over $90 for a new one. So Vortex including an aluminum low-profile case by default is a great addition and significantly bumps the value of the keyboard.

Depending on the branding or color scheme, though, it seems that you may not get RGB replacement modifier keys. In my case I can confirm I did, but other people who've reviewed the POK3R have found that it didn't come as standard. 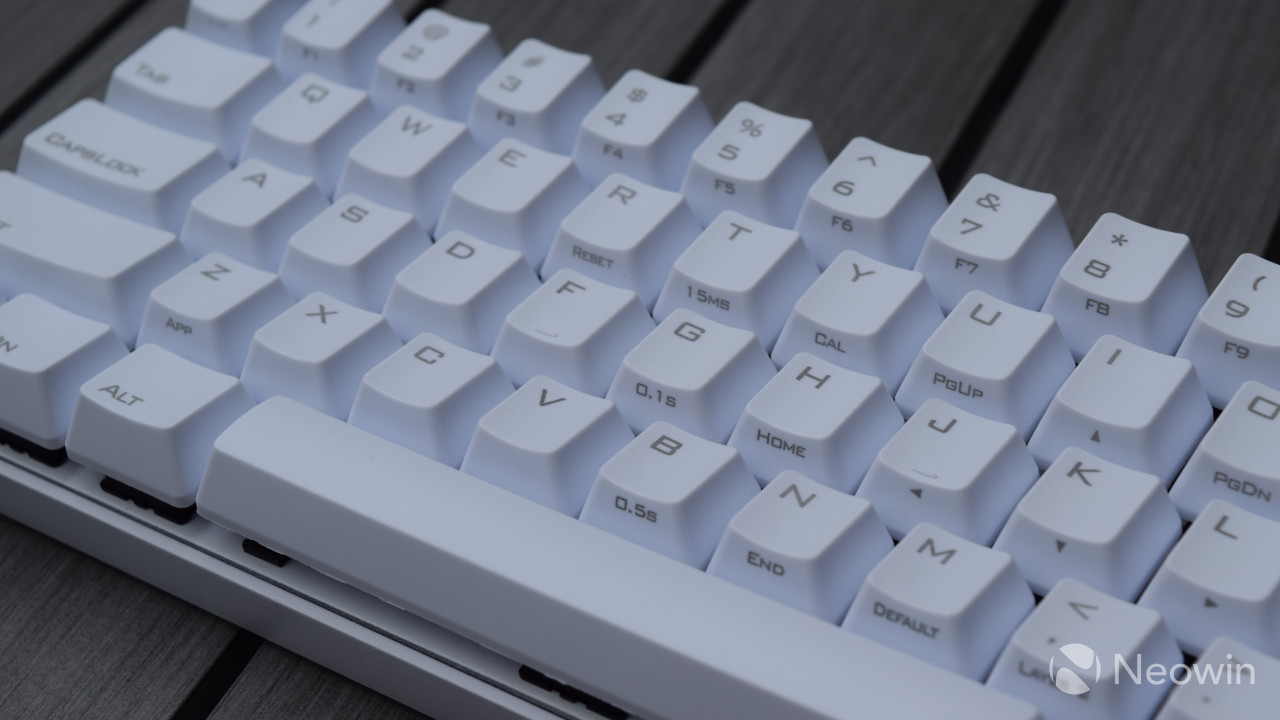 Moving to the underside of the keyboard we find a small aluminum plate with the serial number and model name, and there is also a small cutout in the case for the DIP switches. There are four rubber feet on the bottom which are designed to stop the keyboard from slipping around on the table - when combined with the general weight of the keyboard, it makes it extremely solid and difficult to accidently (or even intentionally) push around your table.

Vortex uses high quality and fairly thick PBT keycaps, which is in comparison to typical ABS keycaps provided out of the box. PBT is considered to be an 'everlasting' key, in that the plastic is very, very difficult to ever smooth out. If you've owned keyboards that had part of the keycaps go shiny and smooth, it'll take significantly longer to run into the same situation on these. They also have a nicer sound to them, closer to a 'thock' than a click, so all in all it was another cool addition by Vortex. It's also worth mentioning that the keyboard appears to all be in ANSI.

The keyboard comes with either Cherry MX Clear, Red, Brown, Blue or Black switches which is pretty good variety, especially with the inclusion of the ever-popular Cherry MX Clears. I personally went for Cherry MX Browns (45cN) as I find them to be the most comfortable to type on, but this is a personal preference thing. 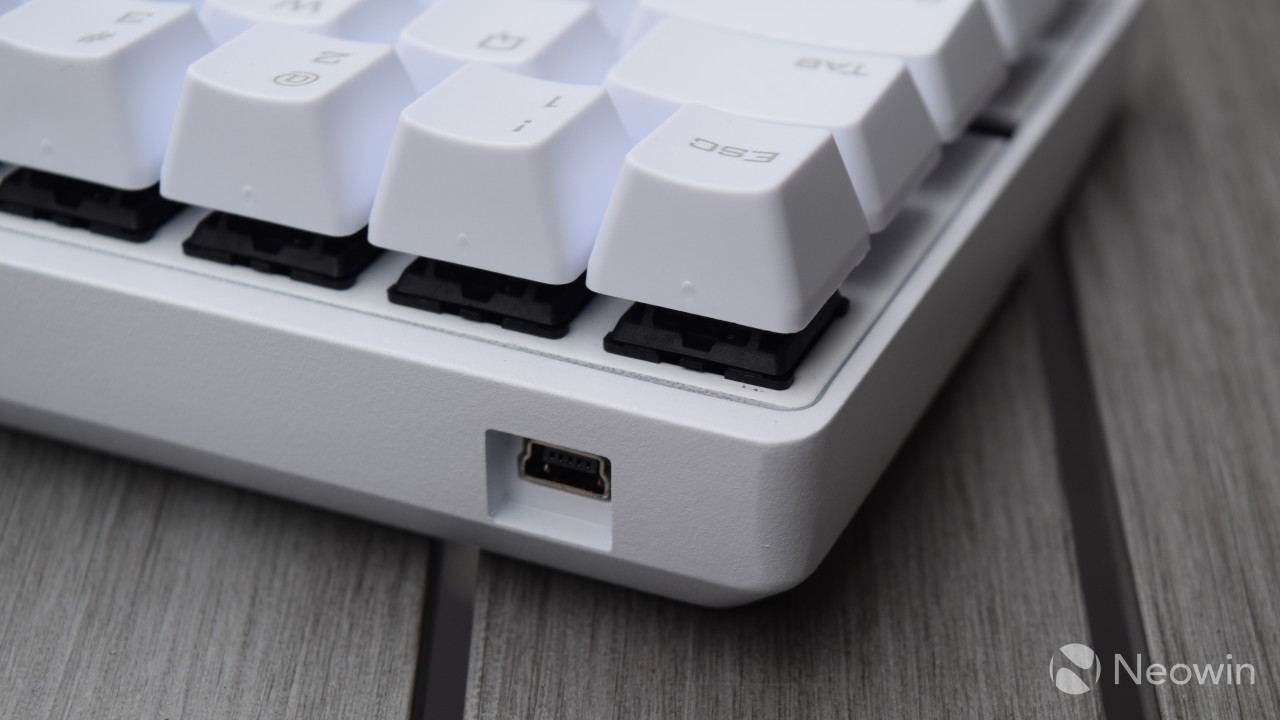 The four DIP switches on the back of the keyboard allow a user to quickly switch between different keyboard settings, such as enabling or disabling a DVORAK, COLEMAK or QWERTY layout (first two DIP switches). The third switch allows you to turn your Caps Lock key into an FN key (something I found extremely handy - makes typing significantly easier). The fourth and final switch allows you to move the FN and PN key to wherever you like on the keyboard, barring one or two locations (after a round of Googling I figured out the one location you can't switch it to is the right CTRL key).

The rule of thumb is that the smaller the keyboard, the more ergonomic and comfortable it is. And this holds true for a number of different reasons, with the most prolific being the distance your hand needs to travel around the keyboard to get to the key you want to press. By extension, this also impacts the distance your hand has to travel to the mouse if you're right handed. With the POK3R, the distance is as little as 12 to 13cm, whereas on a full-sized 104-key keyboard that distance extends to as much as 30 or even 40cm. As such, the POK3R has been one of the most comfortable keyboards I've used, and even after 13 or 14 hour coding sessions, my wrists feel comfortable and rested especially compared to using a 104-key keyboard. 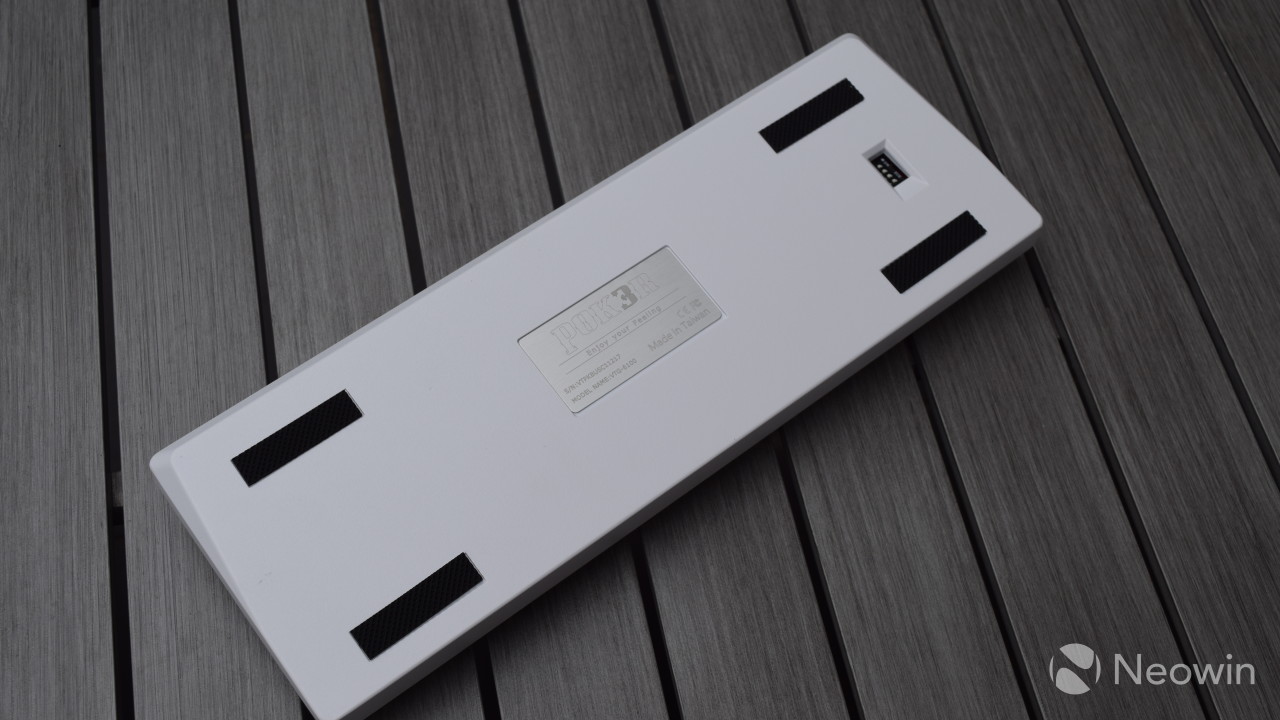 I covered this in the design section but it's worth iterating it again: the quality of materials used in the POK3R is phenomenal. Starting with the aluminum case and moving on towards the PBT keycaps, you end up with a very high quality keyboard that will be resistant to breakage, flexing, or even having the keys become shiny. It's probably the most sturdy keyboard out-of-the-box I've ever used.

It's worth mentioning that the keyboard also comes in an RGB backlit edition, and if that's what you're into then you're in luck. But the backlit version likely has clear ABS keycaps that are painted and laser etched, so you won't get anywhere near the quality of the thick PBT keycaps I received on mine.

Perhaps the biggest feature of the POK3R is the programming ability. There are now four independent programming layers found that you can toggle through the keyboard, and all of the custom keys are saved directly on the keyboard's hardware rather than requiring companion software to program it. The keys to switch into the different layers include M, <, > and / (the last four keys before reaching the left Shift modifier), and you can have a maximum of 32 keystrokes per key. LEDs under the spacebar will specify which layer you're using after switching into it. 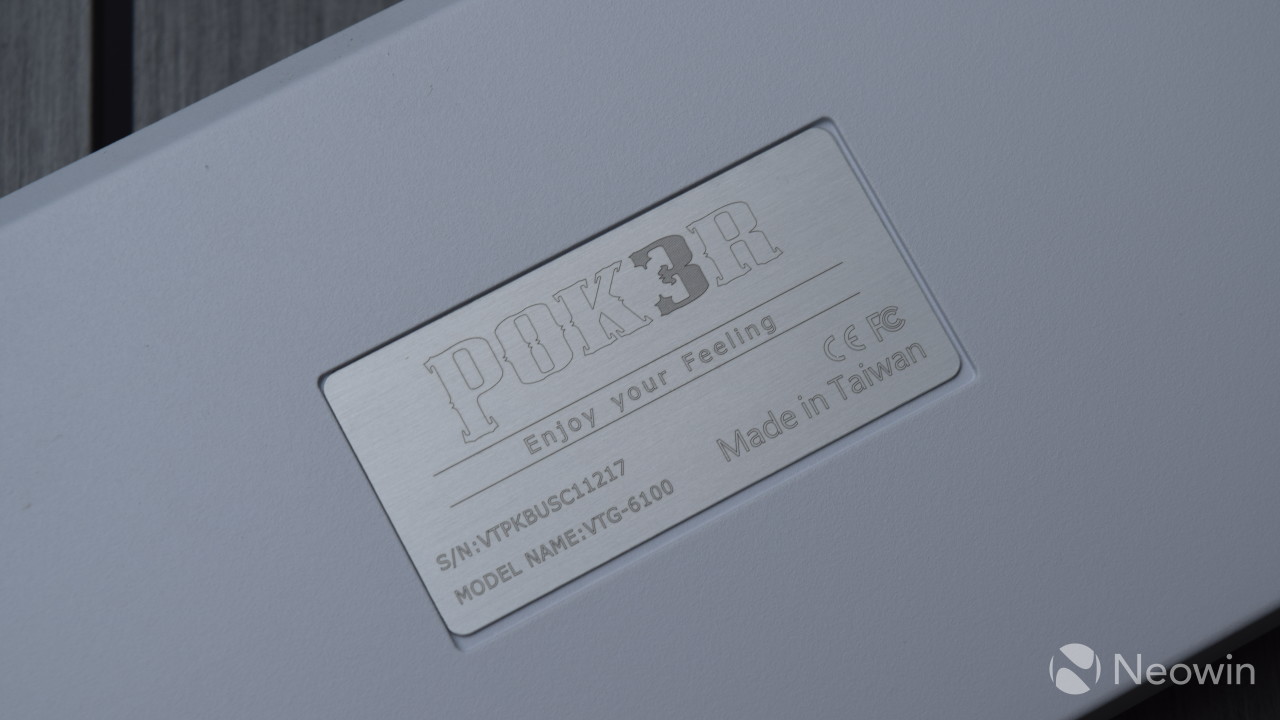 The POK3R has been great to use so far and has been extremely reliable. It worked without issue with OS X and I've been using it for a couple months purely for developing and have had a lot of success with it. There was an initial learning curve on getting used to things like having no dedicated arrow keys (the arrow keys are accessed through FN + I, J, K, L) but I got over it fairly quickly.

Priced at around $120 it's extremely good value for money - especially considering the PBT keycaps and aluminum case that it comes with - and it's definitely worth the hassle to learn the new key combinations for the eventual ergonomic benefits you get from having such a small keyboard. The native Colemak support, the native four programmable layers... it all makes it pretty difficult to fault.

Perhaps one area I didn't like is the way the aluminum case was painted: it looks slightly inconsistent and may flake off ever so slightly in the future. Because of the quality of all of the materials it's also significantly heavier than your average mechanical keyboard, which would make it somewhat difficult to travel with. But both of these are just nitpicking at this point: the keyboard is great regardless of the issues listed above. In the interest of fairness I'll still knock it down a point - especially for the inconsistency of the paint - but those two places are the only areas where I can fault it.

Special thanks to Banggood which sponsored the keyboard for this review. If you'd be interested in picking up a Vortex POK3R, Banggood currently has the Cherry MX red, black, blue and brown variations available for sale at $118.99 - including shipping - if you use the coupon "15offpoker3". 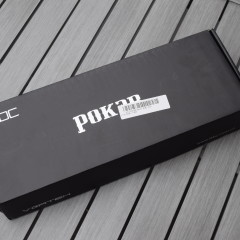 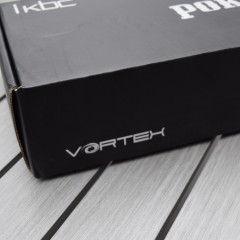 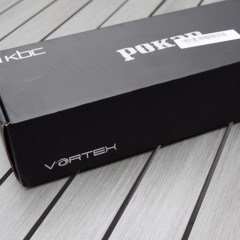 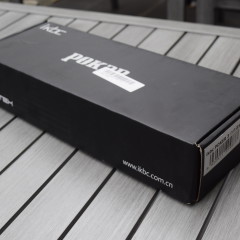 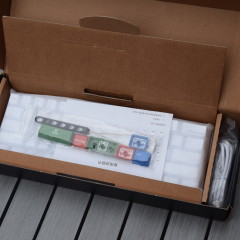 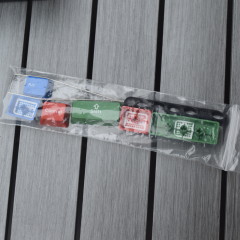 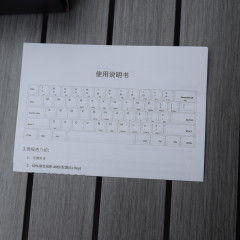 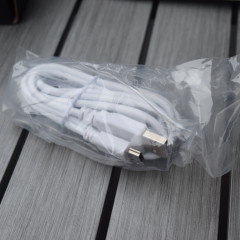 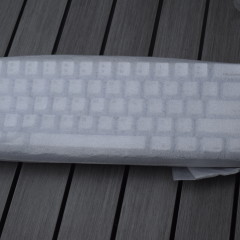 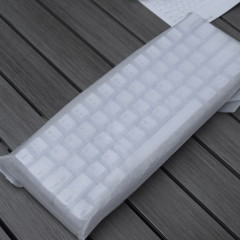 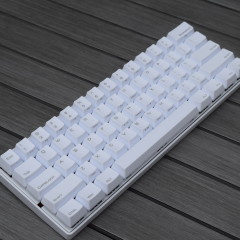 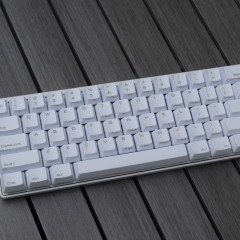 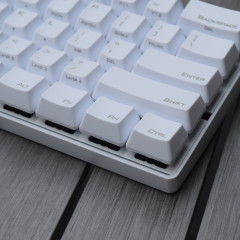 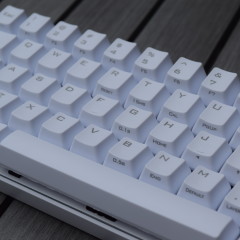 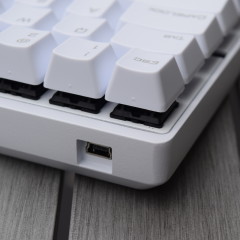 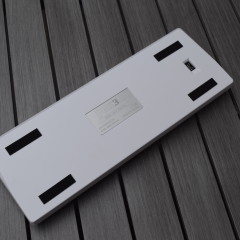 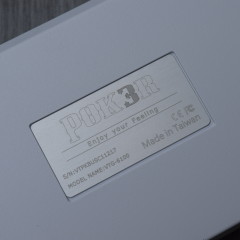 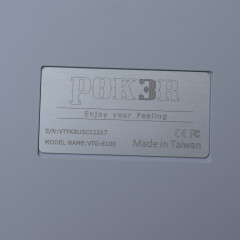 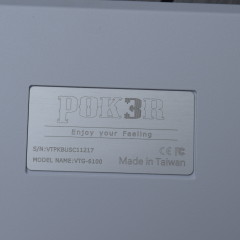 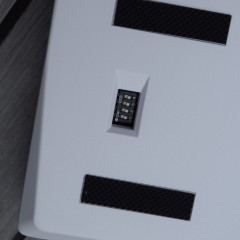 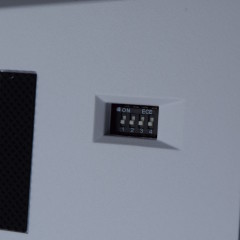 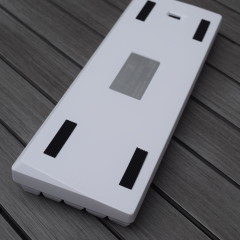