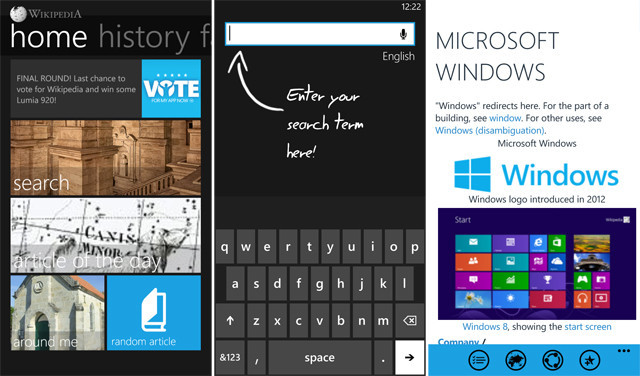 In January, Microsoft announced a new Windows Phone app competition called the Next App Star that asked app developers to submit their best apps to Microsoft judges. The company then picked 64 apps that it considered the best and let the public vote for which apps are the best in early March.

Rudy Huyn's Wikipedia app and Eddie Kezeli's ProShots camera app were named the two finalists, and this past weekend Microsoft asked the public to pick between the two. Today, Microsoft revealed the final result of this past weekend's voting. There were thousands of votes tallied, but in the end the difference between ProShot and Wikipedia was just 155 votes.

Huyn’s Wikipedia app, which might have been helped by a recently launched 2.0 update that added Windows Phone 8 device, ended up winning. In a post on the official Windows Phone blog, Microsoft said:

Huyn’s victory is well deserved. Wikipedia —which after nearly 8,000 customer reviews maintains a perfect five-star average rating— is a tour de force reference app with tons of bells and whistles: It uses the phone’s location to find relevant articles and supports speech recognition, NFC sharing, QR codes, and services such as Pocket (formerly Read It Later) and Instapaper. You can also search in more than 100 languages.

It all began at Mobile World Congress 2010, I watched the keynote from Steve Ballmer where for the first time Windows Phone 7 was presented. I immediately liked the design and the possibility of doing something new.