If a recent survey is to be believed, DirecTV, an American satellite company that provides television service to millions of households, may be looking to integrate Microsoft's Kinect into their set-top boxes. The survey asked various questions about motion/gesture control and asked participants to rate how important each feature was or how much it would help differentiate DirecTV from their competitors. It also touched upon voice activated commands that can be used to scroll through menus, search, and change channels.

Another interesting component was the idea that users could use voice commands to post updates on their favorite social media sites. However the questions mentioned an application that could be installed on your phone as opposed to the standard microphone built into Kinect. 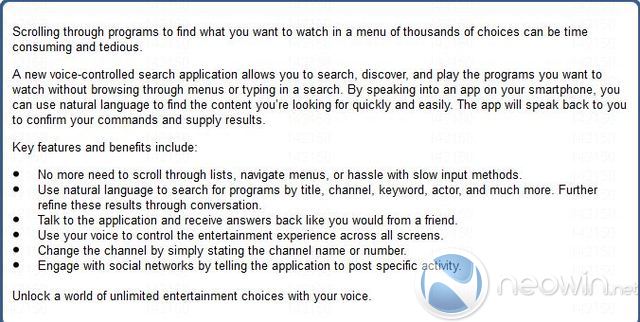 In addition to the Kinect-like features, the questions also touched upon opinions about programming in 4K (which is 4,000 lines of resolution as opposed to the current HD standard of 1080 lines), as well as the ability to record programs on mobile devices so that programming can be viewed outside the home.

There's no indication whether any of these features are actually on a road map or if the survey was just gauging whether the company should start the R&D process. It's also possible that the Kinect-like functionality would be home-grown and not actually license Microsoft's technology.