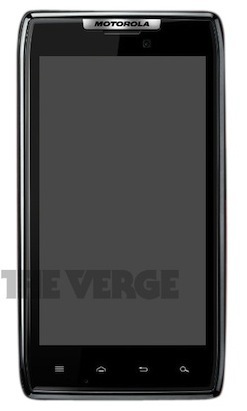 Launched in 2004, Motorola's RAZR line of mobile phones became a huge sales hit for a few years. The flip phones were known for their thin and stylish design and during its life span Motorola sold 130 million units of the device, more than any other flip phone ever made. While the RAZR line fell by the wayside in the wake of the rise of the smartphone, a new rumor from Thisismynext.com reports via an unnamed tipster that Motorola might be trying to bring the RAZR name out of mothballs and on a new phone in its Droid series.

The new Android-based phone, which might also be going by the name the Motorola Spyder, is supposed to have a dual-core 1.2 Ghz processor, support for LTE networks, a 4.3 inch Super AMOLED touch screen display, 1 GB of RAM, an 8 megapixel rear camera, a front facing camera, and more. It's also supposed to have Kevlar casing for added toughness. The phone reportedly has added support for the Lapdock add-on that will allow the user to use the phone as a laptop. The article also has a few pictures of the Motorola Spyder-Droid RAZR.

While there's no word yet on how much this phone will cost or when it will be released, if it does use the "Droid" name in the title it also means that Verizon will likely be the exclusive wireless provider for the product. So far neither Verizon nor Motorola have officially announced anything about this new smartphone.