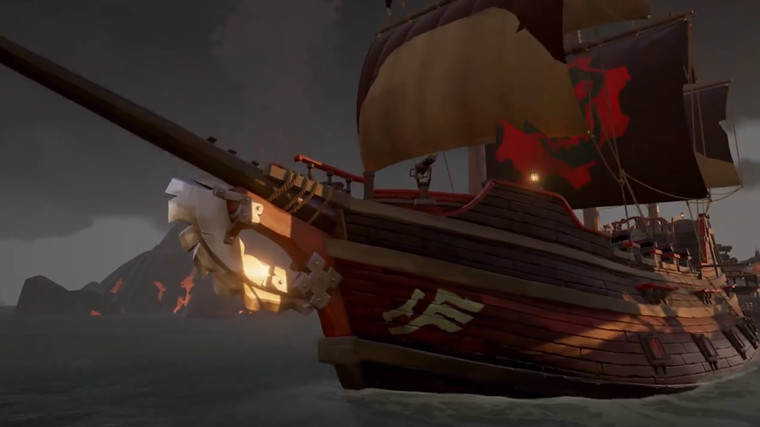 During E3 week earlier this year, Rare celebrated the event with a Halo-themed ship cosmetics giveaway for Sea of Thieves that anyone could earn by just playing the game. And now, with X019 Xbox event looming, Rare is back with another Xbox Game Studios cross-promotion, this time heralding cosmetics inspired by the Gears of War series, made in collaboration with The Coalition.

Entitled the Omen set, this ship cosmetic bundle has Gears-themed sails, hull, flag, and figurehead - which looks like a chainsaw -, which is granted to all pirates that log in to the game for a session between now and November 22.

Of course, this is available to owners of the game as well as those enjoying it through Xbox Game Pass subscriptions, on both Windows 10 and Xbox One.

Look at all that ship! We're proud to reveal the @GearsOfWar-inspired Omen Ship Set, made in collaboration with the lovely lot @CoalitionGears! To unlock the Omen Hull, Sails, Flag and Figurehead, simply play Sea of Thieves any time between now and Friday November 22nd. pic.twitter.com/Zhz3MyNMKU

The event that this item set seems to be celebrating, X019, is kicking off tomorrow with a special Inside Xbox stream, and Rare is attending with some big news, which could be a reveal trailer for at least one of the free expansions heading to Sea of Thieves. Moreover, an Obsidian Wheel cosmetic is up for grabs to anyone tuning in to the stream via Mixer.