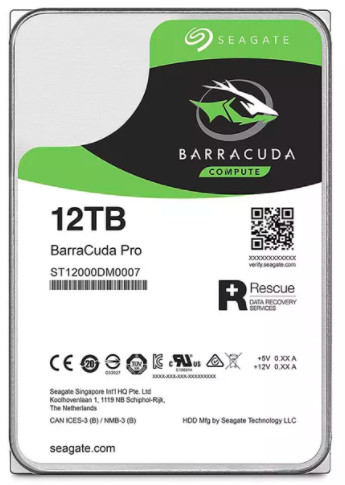 It was in January when Seagate announced to the world that it would be rolling out 14TB and 16TB drives over the next year and a half. This was revealed at a time when internal drives for commercial purposes topped out at 10TB, while consumer applications topped out at 8TB. Getting that much closer to its goal, Seagate has now announced that 12TB drives will be available for its IronWolf, IronWolf Pro, and BarraCuda Pro series drives.

Not only are the drives massive in size, Seagate states that the drives offer the highest capacity in the industry, along with the best reliability and performance when it comes to desktop drives. This might be the case when it comes to something readily accessible to a consumer, but if we are talking about an enterprise application, its rival, Western Digital, recently introduced an impressive 14TB drive.

Matt Rutledge, who is the Senior Vice President of Business Marketing at Seagate Technology, states that:

“Our storage hungry customers and partners continue to ask for our latest and greatest technology along with increased capacity and performance in our purpose built products,” “With the 12TB Pro products, Seagate buyers are overcoming capacity constraints in their systems and can access vast amounts of digital data anytime, from anywhere.”

With the new releases, clients will have more choices when it comes to specific applications. Although the firm does not sell directly from its website, you can check with its partners to see if the drives are available in your region.

Source: Seagate via The Verge