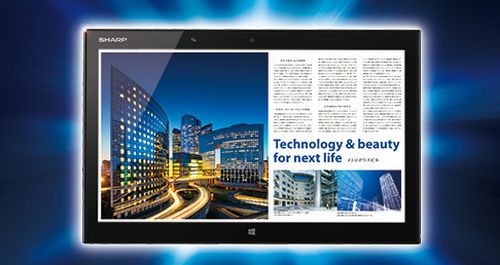 While we are still waiting for Panasonic's long awaited 20-inch Windows 8.1 4K tablet to start shipping, the folks at another Japanese company, Sharp, have plans of their own to release a pretty big tablet, although not quite as large as Panasonic's. The company posted up information on the Sharp RW-16G today, which will offer users a 15.6 inch display for accessing Microsoft's latest OS.

The Japanese product page states that the tablet will have a resolution of 3200x1800. While that's much higher than a HD 1080p display, it falls short of Panasonic's upcoming tablet that will support resolutions up to 3840x2160.

As far as the hardware inside the Sharp RW-16G, it will have an Intel Core i5-4200U processor, 4GB of RAM, a 128GB SSD and a battery that is supposed to last up to nine hours. The tablet itself will weigh 2.7 pounds and will have a number of ports, including an MiniDisplayPort, a SD card slot and an unknown number of USB 3.0 ports.

The tablet is set for release in in Japan sometime in March but pricing was not announced today. There's also no word on if the Sharp RW-16G will be released outside its home country.