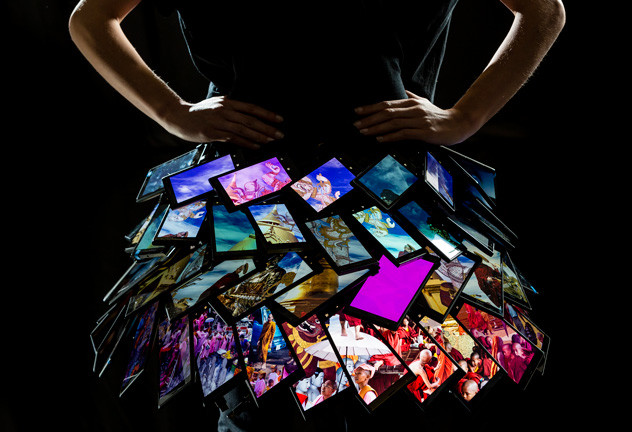 The Nokia Lumia 1520 is arguably one of the the best smartphones based on Microsoft's Windows Phone OS ever made. Now the 6-inch device is being used as the basis for a very unusual fashion statement, which will be put on display during London Fashion Week.

Nokia's blog post states that the company collaborated with fashion designers Fyodor Podgorny and Golan Frydman, who are collectively known as Fyodor Golan, to create a skirt that is composed of 35 Lumia 1520s. A special app was developed for the smartphone that contains GPS features; this allows the displays on the Lumia 1520 skirt to change color in time with the wearer's movements, which creates an illusion of fabric.

UK-based KIN Design also worked on the actual construction of the skirt, which the blog states took a "combination of sketched drawings, 3D-printing, and Python and C# programming languages" to develop. KIN previously worked with Nokia on a project where the 808 PureView smartphone was launched to the upper atmosphere attached to a weather balloon.

Of course, as with many of the designs made for a major Fashion Week display, there are no plans to actually sell the skirt with the smartphones to the general public.