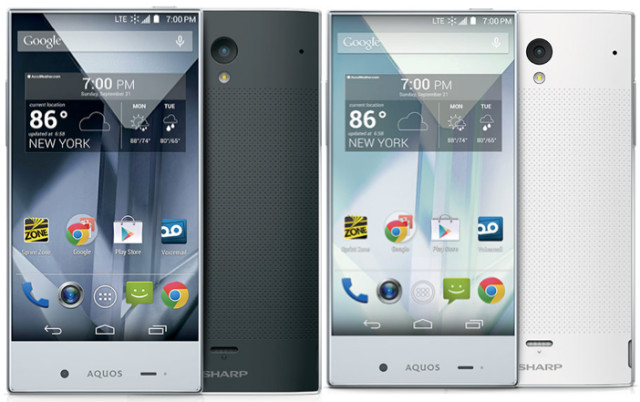 While T-Mobile and AT&T have been at each others throats trying to trump each other for the better part of the year, Sprint has slowly been rebuilding itself with the aid of SoftBank. For the most part, Sprint's attempts to stay relevant has had minimal impact, with every tactic either being forgettable or a mere copy of what was already being offered by another carrier. But it appears that Sprint has finally unleashed a plan that might make customers think twice about signing up with other carriers. Utilizing the momentum of the new plan, Sprint will also offer, at some point, the new Sharp AQUOS 'Crystal'.

While Sharp has not produced a handset for the United States in quite some time, they have been fairly active in Japan and other regions of Asia. The Sharp AQUOS 'Crystal' will have a stunning 5" edge-to-edge display, making it one of the more unique devices being released in the United States. Although other companies have released near bezel-less designs, this is by far the most exaggerated, and it looks magnificent.

The 'Crystal' will also include a 1.2GHz Qualcomm Snapdragon processor, 1.5GB RAM, 8GB storage, 8MP rear camera, 1.2MP front-facing camera, microSD expansion up to 128GB, and run Android 4.4.2 Kitkat. Sprint has not released an official street date for the release, but it will be priced at $239.99 USD without a contract. The device will also be offered on Virgin Mobile USA and Boost Mobile for a price of $149.99 USD.