Almost 10 months after unveiling the Android-running dual-screened Surface Duo, Microsoft finally launched the device this month for a whopping $1,399. For that money, the phone sports – in addition to two screens – last generation specs such as the Snapdragon 855 SoC. It also omits NFC, wireless charging, and 5G support. However, the company’s main selling point for this new form factor is productivity thanks to the two screens.

While the performance of the device should be similar to other devices running the processor from last year, a Geekbench benchmark listing has been spotted which hints that the device could slightly outperform other devices running the same SoC. While the numbers do not hint at a massive difference, the device does score higher than the Snapdragon 855 running Galaxy Z Flip (non-5G version) and the first-generation Galaxy Fold. 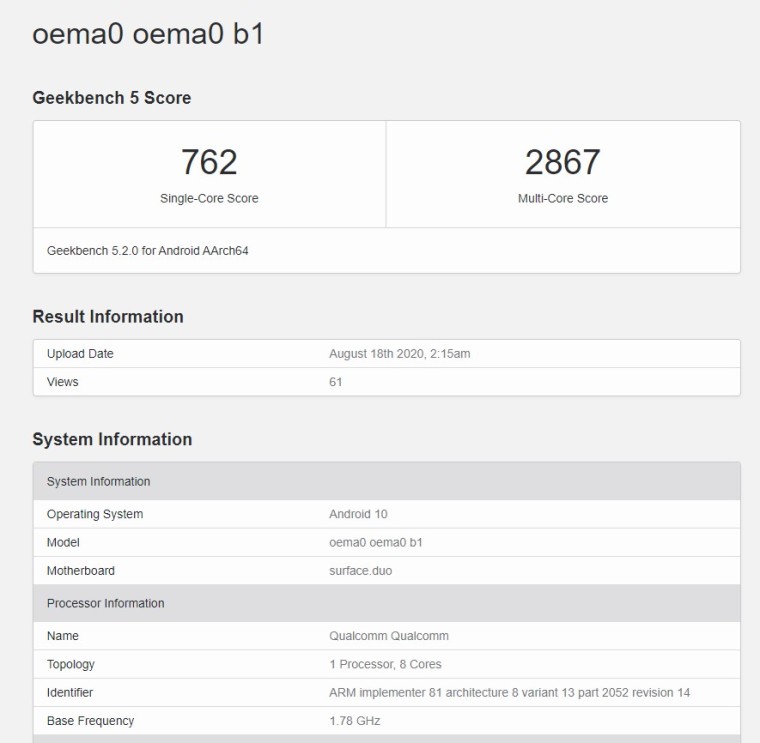 The Duo gets a 762 score for single-core tests and manages to score 2867 for the multi-core test. This puts it slightly ahead of the 741 and 2675 scores for single and multi-core results, respectively, for the Galaxy Fold. The results for the Galaxy Z Flip running the same processor are similar.

While the slightly higher numbers could mean that the firm might have optimized the internals slightly, it does not translate into huge gains. In comparison, a $1,199 5G-enabled, Snapdragon 865-equipped Galaxy S20+ scores 909 and 3160 for single and multi-core, respectively, in Geekbench 5 benchmarks.

Microsoft is touting the prowess of software enhancements and better dual-screen adaptation on its own productivity apps as a benefit on the Duo. However, we’ve argued that though the device represents a new form factor and a first-generation technology, it is overpriced for what it offers.