The general reaction to the Microsoft Surface is that people are quite taken with the device. There’s no denying it’s a good looking piece of tablet. But outside of a Microsoft store or their online store, has anyone actually seen a Surface on the shelves? 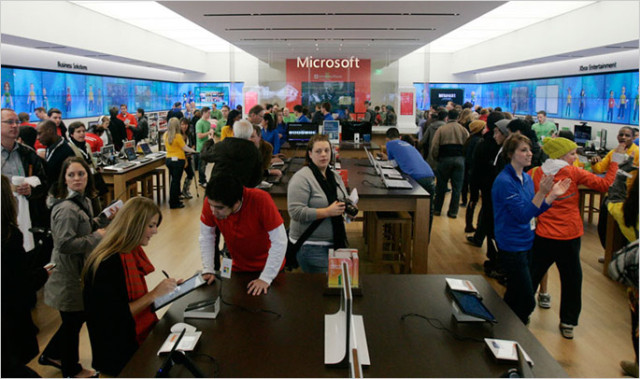 The answer is no; for the foreseeable future, Surface is only available in Microsoft stores. And with these stores being few in number, the lack of consumer facing devices is hurting sales. Detwiler Fenton is a Boston-based brokerage firm that performed research on the device.

Lack of distribution is killing the product. Mixed reviews and a [$499] starting price tag certainly don’t help, but lack of retail exposure at Best Buy and others is severely depressing sales.

Have they a point? There are many people who will see the billboards and advertising for the Surface and think “wouldn’t mind seeing it and trying it,” but will they ever get the chance if Microsoft continues to only stock the device in their own stores? And once they actually see the device, would they be prepared to pay $499 for the device when there are dozens upon dozens of Android tablets undercutting Microsoft’s Surface pricing. And that’s even before we mention the different iPads available.

While sales figures haven’t been properly clarified, Microsoft claims their approach to selling and distributing the device is modest. Having said that, different analysts are sounding out different sales figures for Q4 and the holiday season; some say 1.3 million units, with Detwiler Fenton saying that they will only shift 500,000 to 600,000 units.

Either way, will Microsoft be prepared to change its original strategy and only offer the Surface in their stores, or will the soon to be released $899 Surface Pro force their hand and shift to offering the device on the High Street? Only time will tell.