Has Anonymous become the victim of a cyber attack? That's the new claim from security software company Symantec. In a post on its blog site this week, Symantec says that during the denial of service attacks that Anonymous launched in the wake of the Megaupload shutdown on January 20, an unnamed person modified a tool called Slowloris, used in some denial of service actions, and added the Zeus Trojan to it. 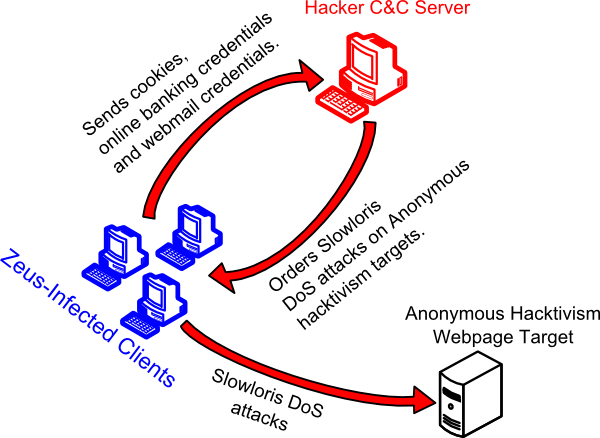 Symantec said a number of Anonymous supporters downloaded this modified Slowloris tool and used it in the group's denial of service attacks. Symantec's blog claims:

After installation of the Zeus botnet client, the malware dropper attempts to conceal the infection by replacing itself with the real Slowloris DoS tool. Zeus is an advanced malware program that cannot be easily removed. The Zeus client is being actively used to record and send financial banking credentials and webmail credentials to the botnet operator. Additionally, the botnet is being used to force participation in DoS attacks against Web pages known to be targets of Anonymous hacktivism campaigns.

As you might expect, Anonymous is not buying Symantec's view of events. In a post on the YourAnonNews Twitter page, the group states, "This post from @Symantec about @YourAnonNews's spreading the DDOS hijacking trojan is wrong & libelous to say the least."