With so many Windows 8 screenshots floating around, it's very hard to tell fact from fiction. Unless you have inside knowledge by knowing the person who leaks you information, or are the one actually leaking the information yourself, it's almost impossible to tell what's real.

Lately, there has been a screenshot floating around the Internet featuring the Windows 8 tablet UI. The first appearance of the Windows 8 tablet UI appeared in a video from Microsoft's official YouTube channel. The four and a half minute video demonstrated the power of the tiles, HTML5 support and much more. However, the video didn't show the notification icon that appeared in the "leaked" picture.

Neowin has received this 'tip' about half a dozen times in the past day, which led us to investigate it before we made any publications. While it is not common for us to post up the fake images that we receive (typically we get tipped once or twice a week with a fake image), this particular image keeps coming in from many sources, so it's time to debunk the image.

As we've seen many news sites posting this, claiming the screenshot to be from Windows 8 build 8030, we have discovered the truth. It's photoshopped. And not a very good 'shopping, either. 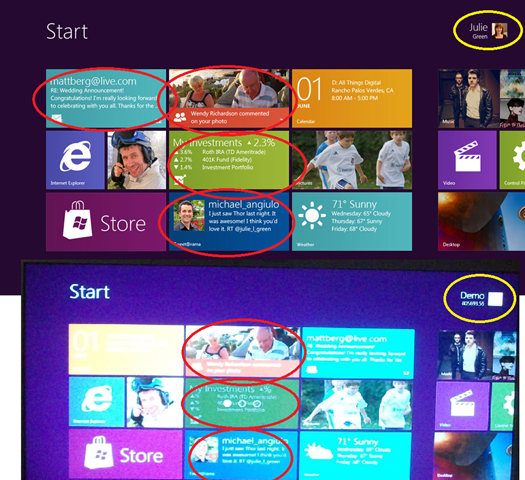 Getting a closer look at the image, you can see it's identical to the one shown off in the video here. The yellow circle shows what was modified, while the red circles show what is the same. The entire image is identical, except there is a notification balloon popup on the bottom right hand corner.

Taking a closer look at this image, you can see that the notification isn't aligned properly. Very unlike Microsoft, right? 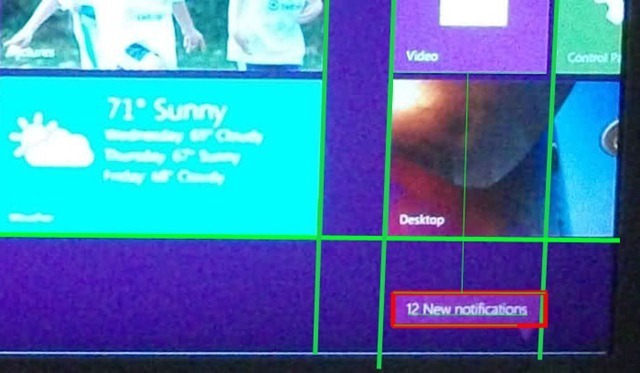 The green lines indicate the angle of the photo, as it appears someone took a picture of a computer screen, to attempt to give the appearance of a true leaked screenshot. The red lines show the alignment of the 'notification' alert.

Hopefully, this puts the screenshot's authenticity to rest and we move on to the next legitimate Windows 8 leak. Thanks to the Neowin Staff for busting this!