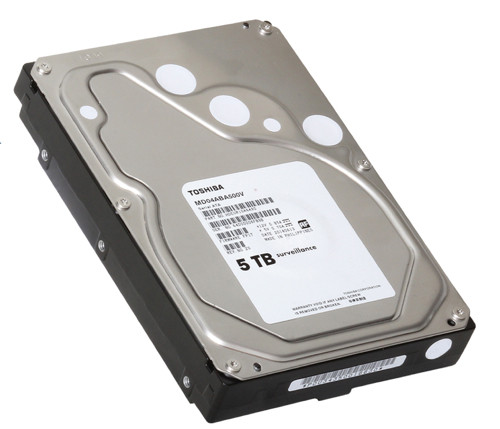 There hasn't been much coming out regarding any new additions to Toshiba's product line, besides the unveiling of a new tablet back in June. Out of this silence, Toshiba has announced a new 5TB hard drive, although it is not meant for the usual consumer market.

The hard drive, dubbed the MD04ABA-V Series, is touted as a "surveillance hard disk drive" and was made to be used for (you guessed it) surveillance. The products specifications are pretty standard: it has the usual 3.5-inch desktop form factor, offering both 4 and 5TB options, 128MiB cache, a 1 million hour Mean Time Between Failures rating (or MTBF for short,) as well as rotational vibration damping for use in RAID enclosures. It also supports incoming data streams from up to 32 high definition cameras and is able to run around the clock. Also, they do not disclose the disk speed, claiming that it is "low," and could mean that the component may spin between 5000 and 6000 rotations per minute.

Toshiba claims that customers using the new drive will be able to "retain higher resolution surveillance video data for longer periods using fewer HDDs," while conserving energy and space. This means that security companies will be able to keep the hi-res videos that they need for investigations for a longer amount of time, potentially allowing more cases to be solved, and leading to a safer experience wherever these hard disks are in use.

Source: Toshiba | Image via The Register