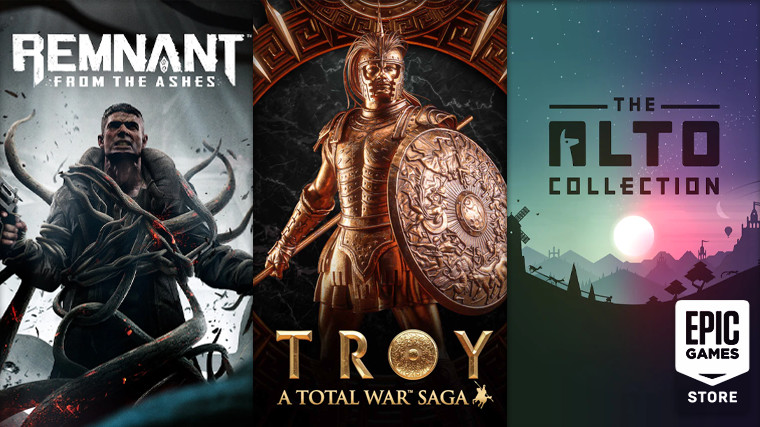 TROY: A Total War Saga releases today, and the Epic Games Store has put on an offer to claim and keep it for free, but only for 24 hours. Along with that, Remnant: From the Ashes and The Alto Collection are available to claim for this week, taking the place of 3 out of 10: Episode 1 and Wilmot’s Warehouse. 3 out of 10: Episode 2 is now also available for free, over here.

TROY: A Total War Saga takes the Total War series the farthest back in time than it has ever been before, attempting to offer an authentic depiction of the ancient Bronze Age. There are new features for faction customization and an economic system based on multiple resources. Here’s how the Epic Games Store describes it:

In this legendary age, heroes walk the earth. In an act that shocks the world, audacious Paris, prince of Troy, elopes with the beautiful queen of Sparta. As they sail away, King Menelaus curses her name. He vows to bring his wife home – whatever the cost!

Remnant: From the Ashes is a post-apocalyptic third-person survival game developed by Gunfire Games, of which previous notable works include Darksiders II and Darksiders III. It takes inspiration from the Souls series of games but takes it a step further by incorporating shooting elements. Here’s how the Epic Games Store describes the title:

The world has been thrown into chaos by an ancient evil from another dimension. As one of the last remnants of humanity, you must set out alone or alongside up to two other survivors to face down hordes of deadly enemies to retake what was lost.

The Alto Collection combines Alto’s Adventure and Alto’s Odyssey into a unified experience, the former originally released in 2015 and the latter in 2018. It’s an endless scroll-runner title, where the character is endlessly skiing through the procedurally generated landscapes – the player simply has to avoid obstacles and perform tricks. Here’s how the Epic Games Store describes it:

Across the endless desert and atop an alpine expanse two journeys full of wonder await. Choose your path and set off on a thrilling snowboarding or sandboarding adventure with Alto & friends.

Epic Games Store is offering TROY: A Total War Saga for Windows and macOS, and Remnant: From the Ashes and The Alto Collection for Windows. Here are the minimum requirements: