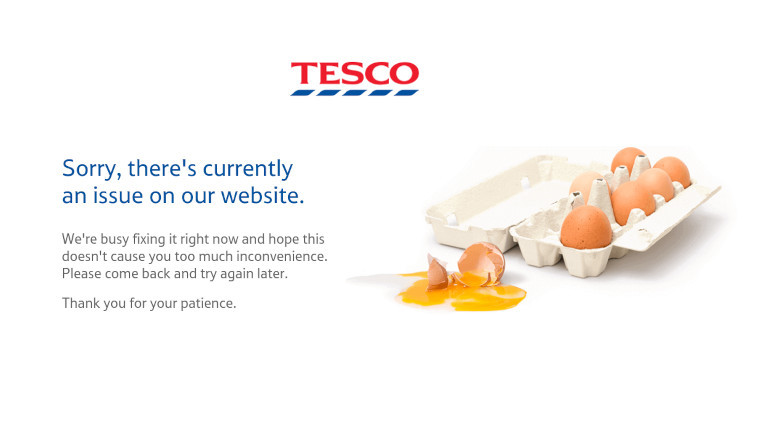 One of the UK’s largest supermarkets, Tesco, has had its site and app partially knocked offline in an apparent hack. The firm initially tweeted about the outage at 9:03 a.m. local time on Saturday but visiting the website now will display an error message if you go past the home screen. According to BBC News, the outage isn’t accidental, the firm told BBC that someone was attempting to interfere with its systems.

In an update, a spokesperson from Tesco said:

“There is no reason to believe that this issue impacts customer data and we continue to take ongoing action to make sure all data stays safe.

Since yesterday, we've been experiencing disruption to our online grocery website and app.

An attempt was made to interfere with our systems which has caused problems with the search function on the site. We're working hard to fully restore all services and apologise for the inconvenience.”

We’re still experiencing disruption with our groceries website and app.
We’re working hard to get things back to normal, and we're really sorry for the inconvenience. pic.twitter.com/vzWmlXIV7t

While many people who do their shopping in person will be unaffected by the outage, there have been growing numbers of people who have started ordering their shopping online due to COVID-19. Many of these customers have reported issues with their orders. One customer speaking to BBC News said that instead of her order, she received 120 cans of Pepsi Max while another said they only managed to do half of their click-and-collect order on Sunday before the website went down.

Tesco has been criticised for not being more transparent about the apparent hack and while it says that no data has been stolen, we won’t really know for sure until it regains control of its systems and checks all its logs – if it even has those in place. In the meantime, customers looking to order groceries will have to buy from one of the other stores.

Update 9am GMT: Tesco says it has restored access and the website, but due to the high volume of customers trying to access to complete or change their order, a "virtual waiting room" has been implemented. Several customers have also replied to the tweet saying they have lost their favourites, and were unable to cancel incomplete orders.

Our groceries website and app are back up and running.
To help us manage the high volume we’re temporarily using a virtual waiting room.
We’re really sorry for any inconvenience and thank you for your patience. pic.twitter.com/OxgJeCdiZy