It's about time: owners of Apple devices based on the A5 chip, namely the iPhone 4S and the iPad 2, have an untethered solution for their devices. Owners of those devices can experience jailbroken freedom on the devices today... so long as they own a Mac. 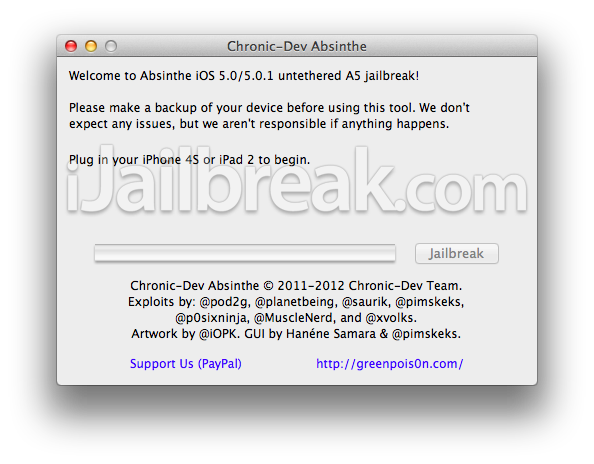 News of the Absinthe A5 jailbreak broke earlier today, as reported by iJailbreak (via Engadget). The tool was assembled by a "dream team" of iOS hackers - familiar names including Pod2G,  P0sixNinja, MuscleNerd, Planetbeing, and Cydia's saurik.

With an untethered jailbreak, any custom tweaks and tools will survive a reboot of the phone, whereas tethered solutions require the phone to be reconnected to a computer running the jailbreak tool after each reboot.

iPad 2 owners enjoyed a brief moment of untethered freedom last year with the Jailbreakme tool, but it was limited to a software exploit on iOS 4.3.3, which was patched by Apple soon after.

For now only the Mac version of the Absinthe A5 tool is available for download on the greenp0ison site, which is currently down due to high traffic (direct link here). A Windows port will be available soon.

Update: The Windows port is now available here. (thanks MASTER260)