We have had summer sales, back to schools sales, and plenty of other sales, but now it is time for an 'End of Summer Sale' courtesy of the Humble Store.

The massive sale discounts thousands of titles across the store, and to top it off, the store is giving away the critically acclaimed Telltale Games developed, The Walking Dead Season 1 for free. The offer began a couple of days ago, but there are still a few hours left on the promotion if you're quick.

Looking into the sales themselves, we will have a broader list of games on the Big Deals list below, however, some highlights include Rocket League for $11.99, Grim Dawn for $9.99, Risk of Rain for $2.49, and The Witcher 3: Wild Hunt Game of the Year Edition for $24.99

While the End of Summer Sale is slated to end on September 21, it seems some deals may change or even end earlier, so be sure to pick anything up that catches you eye. 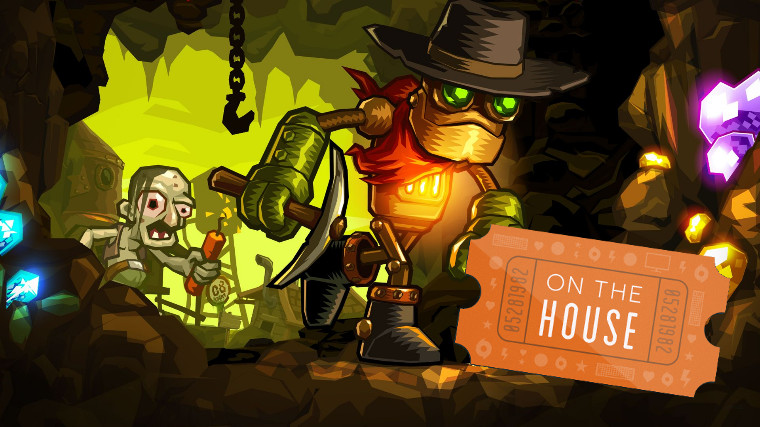 Following a long term offering of Medal of Honor: Pacific Assault for free, EA has finally put forth a new game on its 'On the House' promotion. Replacing the shooter is SteamWorld Dig, a popular 2D-platformer by developer Image & Form.

You will be taking the role of Rusty, a cowboy hat wearing robot, who is tasked with mining for ores under a struggling town, all while defending himself from the various dangers that lurk deep underground. A sequel to the game is also heading for PC sometime later this month, making this a good time to give the original a shot.

All you need to claim the game is an Origin account, after which you can go to the SteamWorld Dig store page to grab it for free. As always, there is no end date on the promotion listed, so it might be a good idea to be quick on adding the game to your collection.

The Humble Jumbo Bundle 9 has come back from last week with some additional indie games in tow. The first tier remains without change from last week, giving you The Flame in the Flood, Infested Planet, and Human: Fall Flat for just $1.

However, the 'pay more than the average' tier contains two additional games this week, Marooners, a party game that includes multiple mini-games to tackle with friends, and Caveblazers, a rogue-like platformer that unsurprisingly takes place in caves. Of course, the three games that were being offered in this tier previously are still a part of it as well, giving Verdun, Samorost 3, and Warhammer: End Times - Vermintide (includes Drachenfels DLC and a Razorfang Poison trinket).

Lastly, the bundle's final tier remains unchanged, giving the popular simulator title, American Truck Simulator as well as all the previous tiers for $10.

The very first free weekend for The Elder Scrolls V: Skyrim Special Edition is now in effect. This remaster of the immensely popular RPG by Bethesda brings along the entire base game, Hearthfire, Dawnguard, and Dragonborn DLC, as well as various graphical enhancements.

While it may be true that even trying to fathom the vast amount of content being offered in this game would take much longer than a measly weekend, it is a good kickoff point for you to see if it is worth purchasing. Any progress and achievements from the free weekend will also carry over to the full game when doing so.

Also, to make the purchasing decision a bit easier, Bethesda is offering a 50% discount for the special edition on Steam until September 19, bringing the price down to $19.99.

Now, with all those pesky DRM-filled games out of the way, let's take look at some DRM-free deals. In addition to the regular weekly deals on the GOG store, it is having a special Warner Bros. sale celebrating a few new arrivals.