The current Humble Monthly bundle has been on offer for three weeks now, meaning you have less than a week before a brand new bundle and an early unlock game takes the place of the current ones.

The current early-unlock game available in the $12 bundle is, of course, Rise of the Tomb Raider by Crystal Dynamics, that received critical acclaim at launch. In addition to that, the bundle will also unlock a selection of other games once it reaches its conclusion next week. However, we get next to no clues on what these games could be, as Humble only says the full bundle will be worth over $100.

The game has Lara Croft following in the footsteps of her father as she searches for the lost city of Kitezh. It doesn't hurt that the city is said to have a connection to gaining immortality as well.

The bundle will refresh its contents on October 6, and don't forget that Humble Monthly subscribers get access to the Humble Trove, which includes a host of DRM-free games to try out, as well as a 10% discount on Humble Store purchases.

It has been 20 years since 'Fallout: A Post Nuclear Role Playing Game' was released into the wild and introduced gamers to its addictive post-apocalyptic world for the first time. While it was a far cry from the much more action-oriented Fallout games we see now, the isometric RPG is still considered one of the best in the series by many old-school fans.

To celebrate the 20 year anniversary, the game is completely free to claim on Steam until 11:59pm PT on September 30th. Just go to the game's Steam store page and click 'Install Game' to add it permanently to your library.

If you're keen on trying out the game, be sure to install the 'Fallout FIXT' enhancement mod to remedy most of the issues that the game will throw at you for using modern systems. Also, be prepared for a difficult venture in your search for that elusive water chip, as the game is pretty unforgiving.

A relic remaining from Bundle Stars' Bundlefest promotion from last week is ending soon, that being the Nemesis Bundle 3. Similar to a bundle by Humble, the new Nemesis Bundle has a few tiers for you to choose from, with each tier adding more and more games to your collection, adding up to 15 games in total worth almost $300.

The bundle brings along games from the amazing S.T.A.L.K.E.R series, Planetary Annihilation: TITANS, Tropico 5, and more. For simplicity's sake we have listed each tier's cost and contents in list form below:

The bundle will come to an end in a couple of days, so be sure to grab it if it piqued your interest. 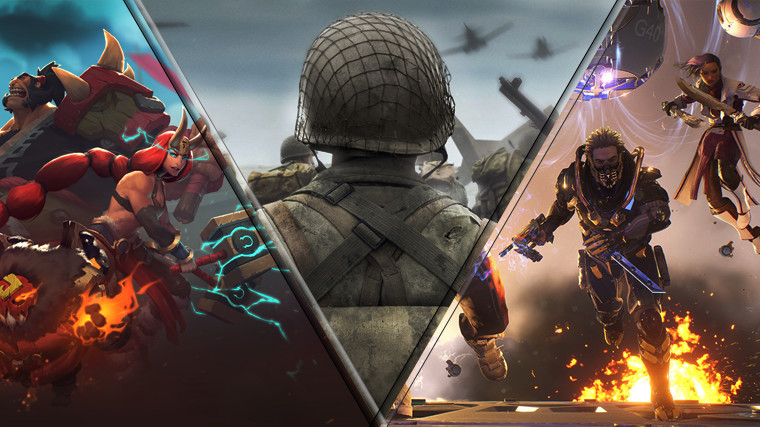 Call of Duty's last venture into the World War II era was with World at War back in 2008, and almost a decade later, the series is finally returning to the brutal time period with Call of Duty: WWII.

The game is set to launch on November 3, however, a PC beta for the multiplayer side of things is now in effect. If you hadn't pre-loaded the game already, you can jump into this open beta by going to its dedicated Steam store page here. The beta will last until October 2, giving you plenty of time to test out its maps, gun mechanics, and all the little details.

While the Call of Duty: WWII beta will surely attract a larger number of players, another shooter is also having a free event this weekend. This game is Lawbreakers by Cliff Bleszinski's studio, Boss Key Productions.

While the game received favorable reviews at launch just last month, it has sadly failed in retaining its players, with numbers falling to abysmal levels. The free weekend should help in rectifying this issue, at least temporarily. So if you have the urge to play a fast-paced arena-like shooter with solid mechanics, Lawbreakers may be the way to go.

You can join in on the event by installing Lawbreakers via its Steam store page. Moreover, free weekend participants also have a chance at winning a free copy of the game, and you can go here for all the details regarding the contest.

Lastly, we leave behind the shooters and look toward Battlerite, a competitive, skill-shot based brawler, that rose to fame last year when it entered early access. The game is finally on its way to launch in its full form in November, and to celebrate, the developer initiated an entire week of free play for the game.

The issue is that this free week began last week, so it is almost at an end, with it ending tomorrow. However, if you're hungry for some fast-paced satisfying fights in solo or team-based matches, this is a good opportunity to have a look at Battlerite.

Even if you miss out on the free event, the game is set to release as a free-to-play title, but the amount of content available for free players will be limited, unlike the full free experience available during the current event.

Warner Bros. entire catalog of published titles is discounted quite heavily on Steam for the weekend, so we have some great games on offer, from the Arkham series to the varied and humorous LEGO games.

Now, with all those pesky DRM-filled games out of the way, let's take look at some DRM-free deals. The GOG store's weekly deals revolve around adventurous games this time, and you can see our highlighted picks below.