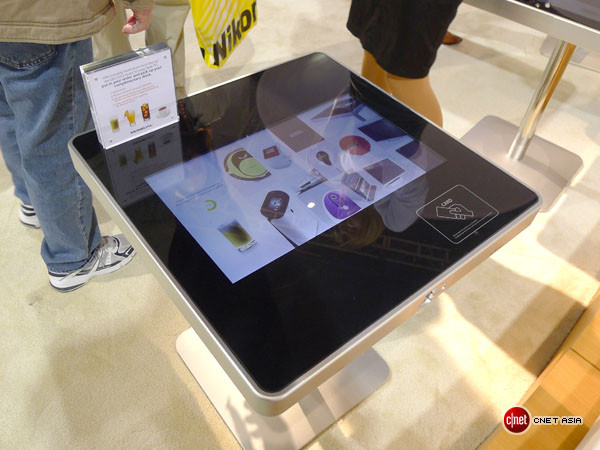 CES is known for companies that offer up some wild gadgets and products that, well, sometimes are never seen again. Such was apparently the case for CES 2013 this week. The products included a Windows 7-based PC that had a very interesting case mod.

In this case, we are talking about a touchscreen table, the MTT300 Touch Table PC from a company called Moneual. CNet.com reports that the PC was set up to be a kind of interactive restaurant table, where people could view the menu from the touch screen, order from its selection and even pay for your food with your credit card.

As you might imagine, the top of the table, where the 22 inch touchscreen is located, is covered in reinforced glass. After all, we don't want to have this PC to break after a spill of a glass of Coke, do we? Moneuel also says the table could be used by customers to surf the net, check up on their social networking sites and more while they wait for dinner to be served.

Inside the MTT300 Touch Table PC there's a Intel Atom D2700 processor, along with an NVIDIA GF119 graphics card, 2 GB of RAM, and a 128 GB SSD. We are a bit mystified that the PC is running on Windows 7 instead of Windows 8, which has much better touchscreen support.

There's no word on how much this table will cost, but we suspect we won't see it in your local McDonald's anytime soon. There's also no word on when the table will be made available for sale, either. Still, it's cool that our sci-fi fantasies about what the restaurant of the future might look like is one step closer to reality.