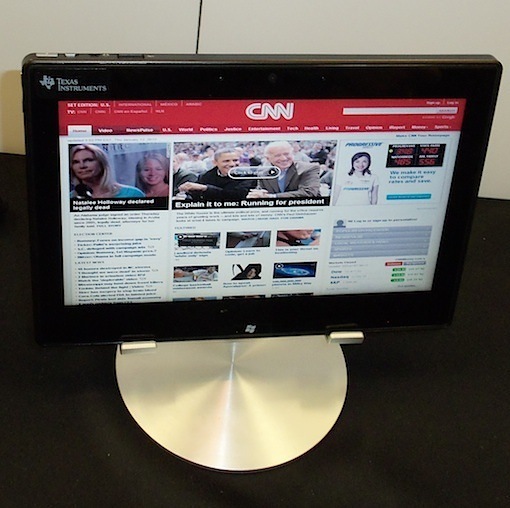 Earlier this week, Texas Instruments announced that it would be showing off how Microsoft's upcoming Windows 8 OS would run on a tablet with TI's upcoming OMAP4470 processor. True to its word, the company did indeed show a tablet running a pre-beta version of Windows 8 this week at CES 2012.

News.com reports that TI showed the demo under some rather restrictive conditions. There was no video allowed but the company did show Windows 8 running Internet Explorer on the CNN.com web site. According to the article, "Scrolling was fluid," and added that there was no jerkiness seen on the demo.

The TI OMAP4470 processor itself is scheduled to be released in smartphones and tablets later this year with TI saying that it will have a 1.8 GHz clock speed. The ARM-based processor is supposed to be 20 percent faster than the previous 4460 chip.

There is some question as to when Microsoft will actually release the ARM version of Windows 8. However the head of ARM, CEO Warren East, has indicated that he would like for Microsoft to take its time with the ARM port, saying, "I'd much rather wait however long it takes to get a quality experience than compromise."