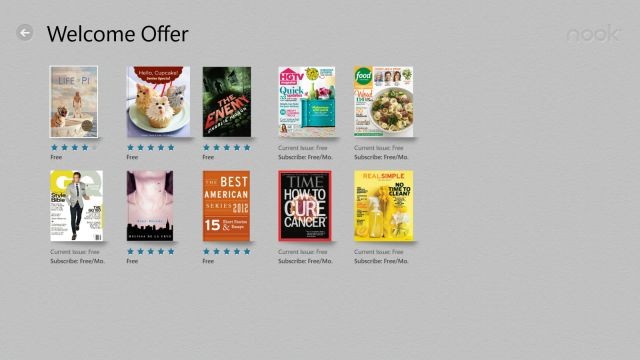 Barnes and Noble released their Nook eReader and online store app for Windows 8 in November, with a design that was created in collaboration with Microsoft, which has an investment stake in the Nook Media subsidiary. This week, Barnes and Noble announced a new offer for Windows 8 Nook users that will net them some free eBooks and magazines.

Barnes and Noble's press release reveals that for a limited time Windows 8 Nook app users can swipe over to the Popular Choices section and see a new "Welcome Offer" listing. That menu selection will give Nook app owners a way to download five free eBooks: The Best American Series 2012 (a selection of 15 short stories and essays), Blue Bloods (a vampire novel from author Melissa De La Cruz) Hello, Cupcake! (the best selling cupcake creation book), and The Enemy (the zombie novel from Charlie Higson).

The final free eBook is Life of Pi from Yann Martel, but Barnes and Noble says that the free version will only be available for the first 100,000 people who download the eBook. In addition, Barnes and Noble is giving away the current issues of five magazines via the Nook Windows 8 app: Food Network Magazine, GQ, HGTV Magazine, Real Simple and Time. A credit card or some other kind of payment account is required to access the free books and magazines but it will not be charged.