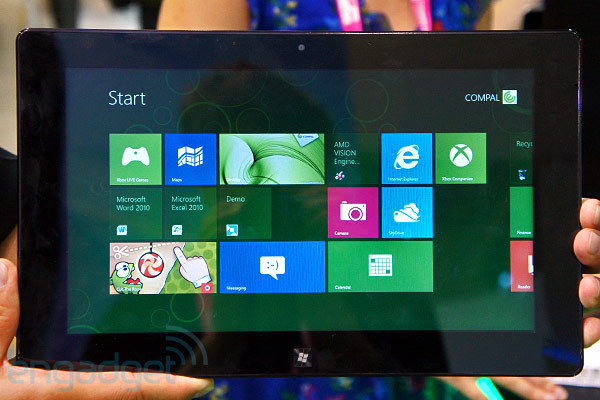 Windows 8 has promoted by Intel like crazy and WindowsRT has also been shown off in tablet form running on NVIDIA, Qualcomm and Texas Instruments chips. But what about AMD? While the company has promoted its Catalyst graphics driver updates for the Release Preview version of Windows 8, the company has said little about its hardware plans for the OS.

Engadget reports that during Computex this week, AMD finally showed off a tablet prototype running on one of its Trinity A6 APUs. The tablet was made by Compal, and has an 11.6 inch touch screen with a resolution of 1366x768. It also comes with a keyboard dock that AMD said was "far more spacious than what we're used to."

Unfortunately, AMD didn't reveal anything else about what was inside this tablet, including the amount of memory, storage space or battery life. It's more that possible that the company is keeping details a secret because the hardware specs are still fluid.

It also remains to be seen if AMD will join Intel by offering any tablets running Windows 8 when Microsoft officially launches the OS later this year. Intel has already claimed that over 20 tablets are in the works that will be running on Windows 8 with its processors.