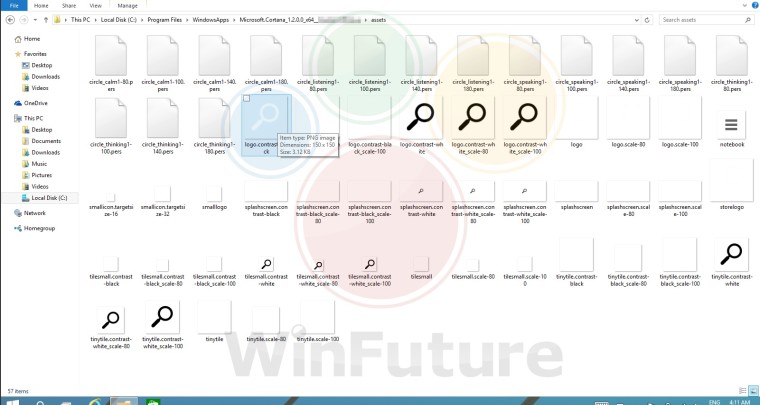 In mid-July, Neowin broke the news that Cortana will be coming to Windows 9, and thanks to a leak of a build of the upcoming operating system, we can now see more evidence of the digital assistant.

As seen in the image above, the folks over at WinFuture.de (German) have found the resource files for Cortana. Unfortunately, as we have previously noted, this is a partner build of Windows 9 and, as such, some features are not enabled. Cortana is one of those features, along with Internet Explorer 12, which will have a new user interface.

But how does Cortana work? Well, we can answer that as our sources have shown us the feature. As of right now, Cortana is an app; it’s a simple app that opens up the personal digital assistant where you can then either type in your question or ask verbally inside a relatively small window; it's not a full-screen experience like you see on Windows Phone.

The app itself currently looks similar to that of Windows Phone, but takes up roughly 25% of your display, with Cortana being in the center; in terms of design, Cortana maintains her circle shape and is animated, too.

The cool thing about Cortana is that since Microsoft is updating her functionality so frequently, those features are also included in the desktop version as well. Microsoft has already said that Cortana will be updated at least twice a month, which means that by the time Windows 9 launches, Cortana will be significantly more robust than today.

Microsoft has been relatively quiet since announcing that the Start menu would be coming back to Windows at BUILD earlier this year. The current rumors say that a build may be shown off at the end of this month, but Microsoft hasn't officially announced any event.