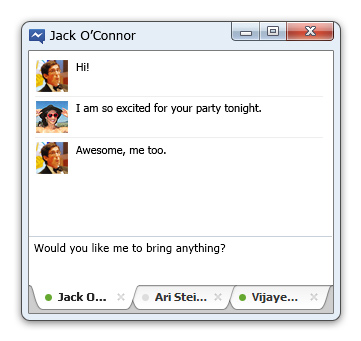 Facebook's Messenger client was first released for Windows users back in December, but that was an unofficial and leaked version of the app. Now, nearly three months after that leaked build broke out, Facebook has finally released the official version of its stand alone Facebook Messenger app. You can download the app from Facebook's web site now. This app is just for Windows 7 only although support for other versions is coming in the future.

The app allows its Windows-based users to chat with their Facebook friends without having to go to the Facebook web page itself. It also allows users to see their latest Facebook friend requests, be notified if there is any friend activity such as a comment or a new friend approval or if they have been tagged in a photo. Otherwise, the app is a pretty bare bones affair in terms of features. There's no support for voice or video chat, which is a bit odd since Facebook has a partnership with Skype.

For those of you on a Mac desktop or laptop, a version of Facebook Messenger is reportedly on its way to your platform as well, although Facebook has yet to confirm a release date.