Earlier this morning, Microsoft announced a new program that, among other things, promised to give Windows Phone app developers earlier and faster access to OS updates. Now Microsoft has issued the first of these faster updates, with the debut of a preview version of 'Update 3' for Windows Phone 8 developers. 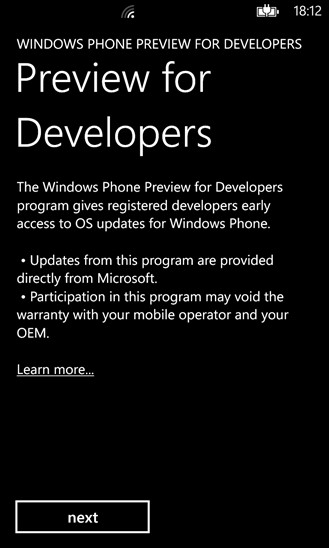 The preview, which can be downloaded from the Windows Phone Store, is designed to give app makers a heads-up on the new features that Microsoft will be rolling out to Windows Phone 8 device owners in the coming weeks and months. They include support for screens up to 6 inches, quad-core processors and more.

Developers who want access to this preview version must have an active Windows Phone Dev Center or App Studio account and a developer unlocked device. The device itself must also be running Windows Phone version 8.0.10322.71 or greater. If they do download the 'Update 3" preview, the devices cannot be reverted back to a previous version of the OS. Finally, the preview version is just of the OS update and does not include the individual drivers and firmware for each Windows Phone 8 device.

Source: Windows Phone Store via The Verge | Image via Microsoft