It seems like yesterday when Microsoft's Internet Explorer 6 garnered over 90% of the browser marketshare, and Firefox was in its infancy.  But those weren't the good old days -- there were many security vulnerabilities, poor standards support, and lack of tabbed browsing.

Browsers really have come a long way since, and as such, WordPress has decided to drop support for IE6 in an announcement on their blog,

"With this update, WordPress has discontinued support for Internet Explorer 6. It has required increasingly complex code trickery to make the WordPress dashboard work in the IE6 browser, which was introduced 10 years ago and does not support current web standards..."

You might be wondering about how bad the new Dashboard looks with IE6, and unfortunately, it does a fair job of mangling many of the visual elements, as evidenced below: 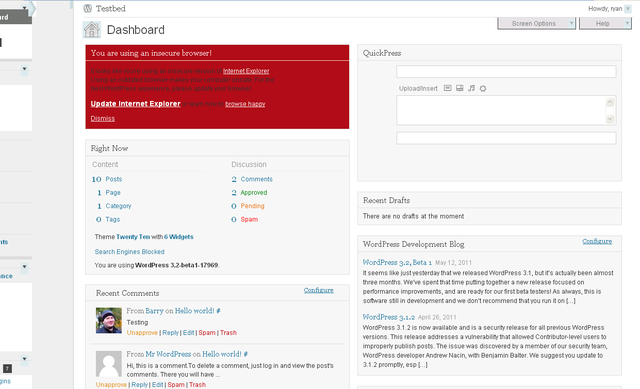 WordPress is certainly not alone in dropping support for IE6, Microsoft is encouraging companies to upgrade to newer browsers.  The Windows Team Blog has even posted a blog entry, thanking WordPress for ending support on IE6, and pointing out that this browser is now ten years old!

For those of you interested, Microsoft hosts the IE6 Countdown site, which breaks down IE6 usage over the globe.  According to metrics (for April 2011) listed on the site, China has the highest percentage of users on IE6 (35%!), and globally IE6 usage is at 11.4%, down 7.3 percent from April of 2010.