Major Nelson is reporting that Microsoft plans to enable Xbox 360 owners to store profiles, saves, game demos, and other Xbox files on any USB memory device starting April 6th. It will come in the form of a system update available to Xbox Live subscribers.

When you connect a USB memory unit, you can go to the memory configuration screen to configure the drive. This entails a quick one-time check to see if the drive is working properly, followed by setting the amount of memory you want to use on the drive. The capacity will be capped at 16GB, and you can have up to two devices connected at the same time, giving you a maximum of 32GB of USB memory space. The device will then be viewable in the memory management screens. 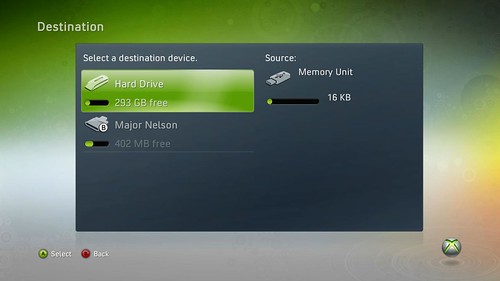 This is great news for those not willing to pony up cash for a proprietary Xbox 360 hard drive when you run out of space on the drive that shipped with your console. It also means you can now use flash memory, which will boost memory performance many times over. This will make the entire Xbox Live platform more portable than it is now, allowing easier transport of files from console to console, and opening up more opportunities for content sharing.

Microsoft will also be teaming up with SanDisk to release an Xbox 360 branded flash drive that will be released in May, not long after the update goes live.