AdBlock Plus - which purports to block the garish, distracting advertisements found on a vast multitude of websites today - has attracted quite a sizable following across the globe. Many of its users find that, on the whole, it lives up to its claims, making web browsing more enjoyable and faster, while reducing the amount of data used by hiding and disabling adverts on webpages.

However, although data consumption may well be lowered, Mozilla suggests that enabling the popular plugin could result in exceptionally large amounts of RAM being consumed by the program. They found that just enabling the plugin on a 64-bit system could result in a constant additional RAM usage of 60-70MB on top of which Mozilla normally uses. 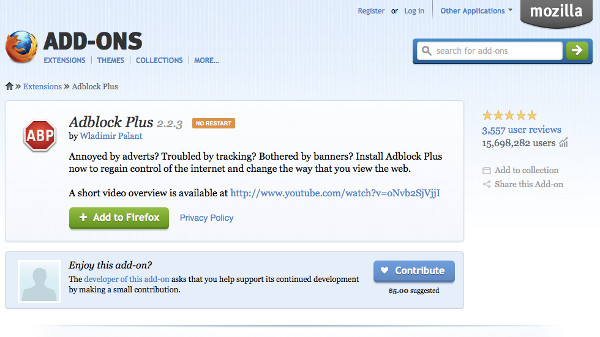 This may not sound like much until you realize that this is just the overhead incurred by simply having the plugin enabled. Whilst browsing a website with a relatively generous helping of ads, such as TechCrunch, Mozilla found that RAM usage by Firefox increased by over 200MB with AdBlock Plus enabled (417MB of RAM usage with the plugin, versus 194MB without).

With some more intensive websites such as the VIM Color Scheme Test, the plugin ended up consuming nearly 2GB of RAM at 1960MB; without it, just 370MB was used.

The AdBlock Plus development team recently acknowledged the issue on their blog and commented that the exceptional RAM usage was caused by a number of known bugs. One issue is that the plug-in's method of blocking adverts - by injecting stylesheets into HTML iFrame containers - incurs a gradual build-up of 4MB per iFrame. The issue is exacerbated as Firefox ends up duplicating these stylesheets for each new page loaded, eventually resulting in the immense RAM usage noted by Mozilla.

Hints of a major update to AdBlock Plus were dropped as the team said it wants "to implement [its] own way to store data" as an alternative to using the memory-intensive JavaScript data structures currently implemented.

For users who have large amounts of RAM installed on their machines, such as 8GB or more, this memory consumption may not prove to be too significant. But those with devices that have far less RAM installed may see more significant slow-downs if AdBlock Plus's memory usage hits the levels that Mozilla saw in testing.

The issue has not been noted in the Internet Explorer or Google Chrome versions of AdBlock Plus.

Source: Mozilla | Image via AdBlock Plus