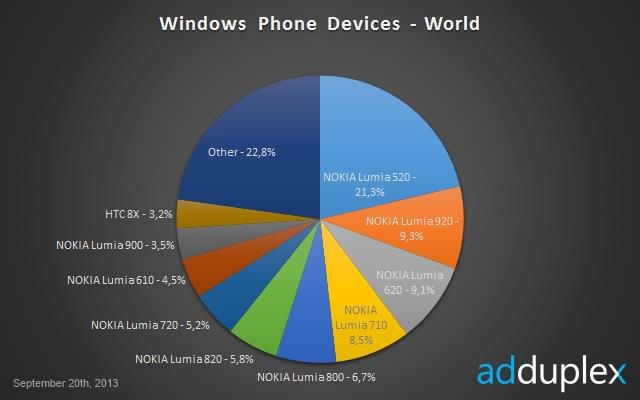 If you own a Windows Phone device, the chances are better than one in five that it is the Nokia 520 or 521. That's the word from the online ad network AdDuplex, which released its latest report on the Windows Phone devices that connect to its service today.

For September, the use of the Nokia 520 went up to 21.3 percent of all Windows Phones in September. That percentage is up from 13.3 percent in July and 18 percent in August. In the U.S., where the phone is sold as the Lumia 521, it is now the second most used Windows Phone device with 14.2 percent.

The Lumia 521 is very close now to the Verizon exclusive Lumia 822 for the most used Windows Phone in the U.S., which in September had a percentage of 14.6 percent. It's likely that it will overtake the Lumia 822 next month.

Despite a ton of publicity from both Microsoft and its U.S. carrier AT&T, it doesn't look like the 41 megapixel Nokia Lumia 1020 is catching on. AdDuplex claims that on its ad network, the 1020 ranks in 11th place in the U.S. and 28th worldwide. It would seem that people are gravitating to the cheap no-contract phone models like the Lumia 520 and 521.

One more interesting stat: The Windows Phone 8 GDR2 update is now installed in 30.6 percent of all devices that support it, up from three percent in August.

By the way, Windows Phone app developers who sign up with AdDuplex between now and October 31st are eligible to win either a Surface 2 or a Lumia 1520. More details can be found at the contest's web page.