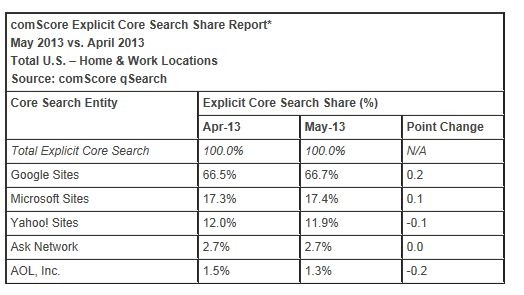 Microsoft's Bing search service is still making slow but steady progress in claiming more market share in the US. That's what's being reported over at ComScore, which offered its latest U.S. search market share numbers earlier this week.

ComScore's new data for May 2013 shows that Microsoft's sites increased their search market share by 0.1 percent compared to April 2013, bringing its total to 17.4 percent. Search leader Google went up by 0.2 percent to 66.7 percent in May. Yahoo's share went down by 0.1 percent and now claims just 11.9 percent of the search market.

It would appear that Microsoft's search growth with Bing comes even as Yahoo's US search market share has gone down. The Bing search engine powers Yahoo's results, thanks to a long term agreement between Microsoft and Yahoo. Just this week, Apple announced that Bing would be the default search engine for its Siri voice recognition tools that are a part of the latest version of iOS.