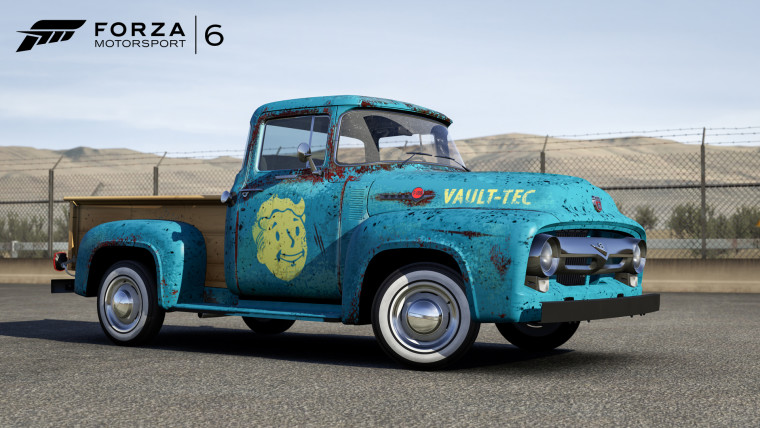 The release of Fallout 4 is less than a week away, and Bethesda's unorthodox marketing campaign is in full swing - from Nuka Cola Quantum-themed drinks to loads of additional goodies being offered with every collector's edition.

Now, the company behind Fallout 4 is traveling across genres to offer Fallout-themed content in Xbox One-exclusive driving sim Forza 6.

In an announcement video posted on the official Xbox YouTube channel, viewers got a look at current (and upcoming) Fallout-related DLC for Forza 6 - including a 1956 Ford F100 sporting a rusted out exterior and Vault-Tec decals, as well as a teaser for the upcoming, completely driveable Chryslus Rocket 69.

Fans of Fallout will recognize the vehicle's make - Chryslus - as one of the major pre-war automotive manufacturers, whose vehicles were introduced in the original Fallout, and are seen scattered around desolate highways in Fallout 3 and New Vegas.

Forza 6 owners can currently download the DLC, which is available on Xbox One. And check out the official, drift-heavy video from Xbox below.