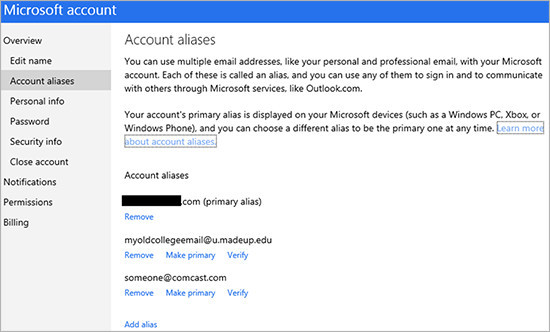 A few days ago, Microsoft announced that it was now allowing anyone who used its online account could now change their primary alias to any of their other aliases. While this was certainly a welcome change for many of those users, it also has a large consequence if they own a Windows Phone device.

According to Winsupersite, changing the primary alias will no longer allow a Windows Phone product to sign into Microsoft's services, unless the owner decides to implement a hard reset on that phone. This is due to the basic architecture of the OS and affects all versions of Windows Phone. Changing the primary alias on a Microsoft Account does not affect signing onto a Windows 8 or RT PC, an Xbox 360 console or the Outlook or SkyDrive services.

According to Microsoft general manager Eric Doerr, the issue with Windows Phone will be fixed sometime in the future, but did not offer a specific date. He also said that the company is working on a solution that will allow users to merge two accounts into one. He added:

The important thing for customers to know is that we get it. We get that life is complicated. We get that different people want different things. And we are working to give them that flexibility. We will try to do the right thing by these folks.

In the meantime, if you own a Windows Phone and want to change your primary alias on your account, you better be prepared for a hard reset or wait until Microsoft issues a patch that eliminates that option.