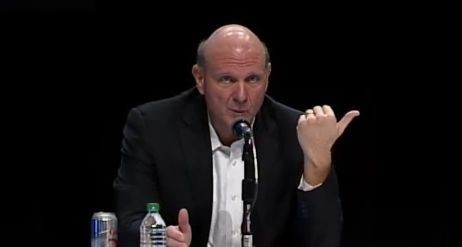 In his memo to employees Friday announcing his plans to retire from Microsoft in the next 12 months, CEO Steve Ballmer said, "I cherish my Microsoft ownership, and look forward to continuing as one of Microsoft’s largest owners." Indeed, Ballmer owns quite a bit of stock in the company and it will make him a very rich man when he finally departs.

Microsoft does not offer any kind of severance pay to its executives when they leave (sometimes known as a "golden parachute"). However, Ballmer will still own 333 million Microsoft shares, or about four percent of the the company. CNN reports that those shares are currently worth $11.5 billion.

That amount makes Ballmer the 51st richest man in the world and the 22nd richest person in the US. Of course, that amount of money pales in comparison with Microsoft co-founder and chairman Bill Gates. He is currently the world's richest man at the moment with a net worth of $72.7 billion.

Ballmer's stake in Microsoft is worth 56 percent more since he took over as CEO in 2000. In fact, his net worth went up by $786 million just on Friday thanks to the stock market pushing the price of the company's shares up by over seven percent. Of course, the stock price went up because analysts somehow believe Ballmer's departure will ultimately be a good thing for Microsoft.

The big question: What will Ballmer do with all of that money? Will he give most of it away to charitable causes, as his good friend Gates is currently doing? Will he use it to invest in lots of tech ventures that ultimate fail, as Microsoft co-founder Paul Allen has done?  In an interview with ZDNet.com on Friday, Ballmer claims he has no idea of what he plans to do next, saying that he won't have any time to think about that until Microsoft selects someone to replace him as CEO.