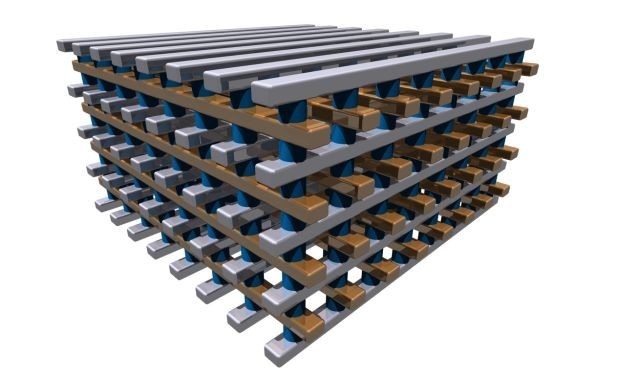 Earlier this week, we reported on an announcement by Crossbar, a new technology startup that said it has come up with what it calls Resistive RAM (RRAM). Crossbar claims that RRAM will be able to handle 1 TB of storage on one chip, and stack several of those chips on top of each other. It also claims that it will have 20 times the write performance of current NAND flash storage, along with 20 times less energy use.

Some people in our news comments wanted to know the cost of RRAM because of its new manufacturing process. We contacted Crossbar and received this statement from their PR representative:

We are not disclosing cost as that has not been determined. It depends on a variety of factors, applications, volumes, etc. However, our technology has a much better area efficiency and better performance than NAND. Crossbar will be able to provide, for the same cost, twice the density of NAND with much better performance.

Prices for NAND Flash storage tend to fluctuate based on supply. The DRAMeXchange.com website claims that currently a 64 Gbit NAND flash chip is priced at $7.50. As far as when we can expect to see RRAM storage in products such as SSDs and in smartphones, Crossbar indicated it might take a little while. It told Neowin:

Currently, we are in discussions with foundries. Over the next 2-3 years we'll be rolling out solution starting with embedded, then standalone Crossbar product and finally move into the IP licensing stage.

With the sales expansion of smartphones, combined with the growing use of SDDs in laptops and even desktop PCs, it's safe to say that we will see huge storage space increases in these products in the next few years.