A popular question for Verizon users as of recent is which phone is better, the HTC Incredible or the Motorola Droid X? A tough choice for sure, but because we get asked this question so often, we decided to compare these two phones head to head to determine which is the best keyboard-less Droid phone in the Verizon lineup.

The two phones are both targeted at the premium smart phone buyer who will settle for nothing less than the best on the market. Both boasting the Android OS, high speed processors, and all the connectivity options you could wish for, but each has their own unique characteristics that set them apart. For a quick breakdown on the phones features see the chart below. 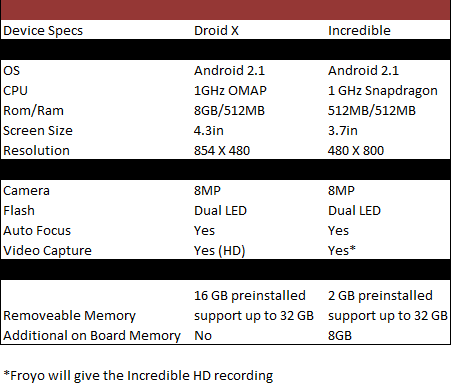 The phones are relatively close in specs when compared across the board except for two areas, screen size/resolution and the amount of memory shipped with the unit. As the memory can be upgraded with an SD card for both units, this point is moot but the Droid X does come with more memory (16GB vs 2GB installed) if that’s a major requirement for your purchase considerations.

The screens on the both are stunning, you can’t help but ignore the clean crisp lines on both the devices but a few differences stand out. First, the Droid X’s screen is about the size of my front lawn. While it does suffer a bit when in direct sunlight, it’s still highly useable and doesn’t present much of an issue. However, while the Incredible’s screen is also beautiful in its own right, but, under direct sunlight it’s a pain to use. It quickly becomes hard to see what you are doing and this is a major drawback when comparing the two devices.

You also can't ignore the higher resolution of the Droid X, while doing things such as phone calls and texting it doesn't show its true value, but when surfing the web, those few extra pixels make all the difference. 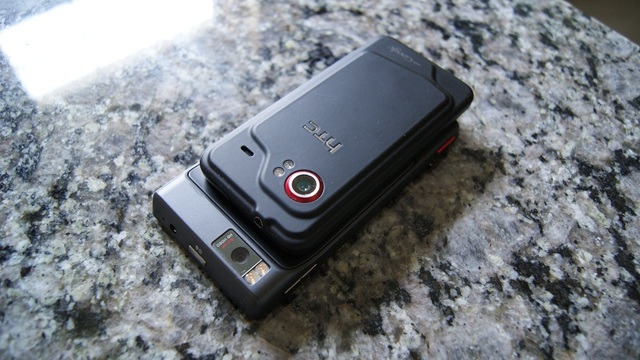 Another feature on both phones are their 8MP cameras. While I feel that 8MP is awesome, what would be better is improvement in the glass, but superior glass doesn’t look good on paper when comparing two devices.  The Incredible wins for two reasons in this category, the Droid X did not accurately reproduce colors, they were generally on the cool side, and also the camera was a bit slower to snap the photos than the Incredible. While not much longer, the half second longer shutter lag is somewhat annoying when trying to take pictures of fast moving objects, and for this, the Incredible wins the camera shootout.

Both phones are exceptional devices for daily use. Whichever you choose, you will be happy with. The Droid X is a large phone, it almost eclipses the term phone, it looks more like a slab that is exceptional for any type of media, but also happens to be able to make phone calls. However, because of its size it does feel a bit awkward in the hand. Not only that, but it’s hard to use this device one handed unlike the Incredible which you can easily navigate with just your thumb.

Call quality is another moot issue, both phones do what you would expect. While neither excel over other phones on the market, neither fall short either. The onscreen keyboards on both devices are easy to use but those coming from a physical keyboard may stumble a bit at first. Also there are physical home row buttons on the Droid X vs the Incredible’s touch sensitive buttons; this is purely a preference in choice. 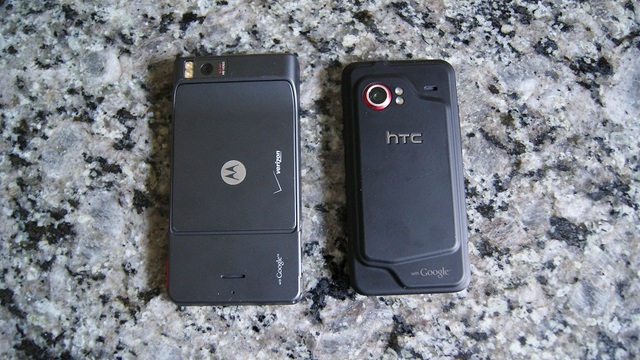 The speed of the devices overall feels similar and the web browsing speed is close enough that choosing one for a faster browser is irrelevant.  Likewise, both feel to be made of quality materials but the physical buttons on both devices could be better.  When pressing the volume buttons on the Incredible it feels like your pushing gravy off of a cliff.  It’s a mushy experience and the resulting click gives you little satisfaction of achievement, but they do get the job done.  Likewise, the Droid X’s home row are marginally better but the buttons are so close together it’s hard to blindly pick the correct one.

While you can find things to compare forever, what’s the end result, which phone should you buy? If you don’t care about the physical footprint of the Droid X, it is the phone to buy. You can’t help but love its massive screen.  When using both phones back and forth, you long for those extra pixels and it’s really hard to go back to the Incredible.  The Incredible is a great phone, but the Droid X goes over the top with its HDMI out, sunlight usable screen and the extra pixels.  Put it this way, if the Old Spice guy was going to buy a phone, it would be the Droid X.